Electricity generation is a major source of greenhouse gas emissions throughout the United States and globally. Our policy reports discuss solutions to achieve a broad and cost-effective deployment of renewable energy as a cornerstone strategy for meeting climate goals. The work spans from improved siting decisions for utility-scale renewable facilities to a political analysis of the state-by-state efforts to address renewables. Renewable Electricity Integration: A Review of Policy Developments in Germany and Their Applicability to California With the recent passage of SB 100, California must continue to grow its renewable energy resources in order to achieve carbon-free electricity by 2045.  As California further integrates variable renewable electricity generation resources (VREs), assessment of Germany’s transition to VREs may provide valuable guidance.

In 2017-18, Grady Mathai-Jackson took a sabbatical from his position as Senior Counsel with Pacific Gas & Electric in order to spend a year as an affiliate with CLEE, and a visiting researcher with the Environmental Policy Research Centre at Freie Universität in Berlin, and to study this transition.  His resulting white paper describes the legal and policy frameworks governing the integration of VREs into the electrical systems and markets in both California and Germany.  It provides quantitative and qualitative assessments of VRE integration in terms of promotion of VRE deployment, cost of integration, and curtailment of VREs.

Beyond the Beltway: A Report on State Energy and Climate Policies 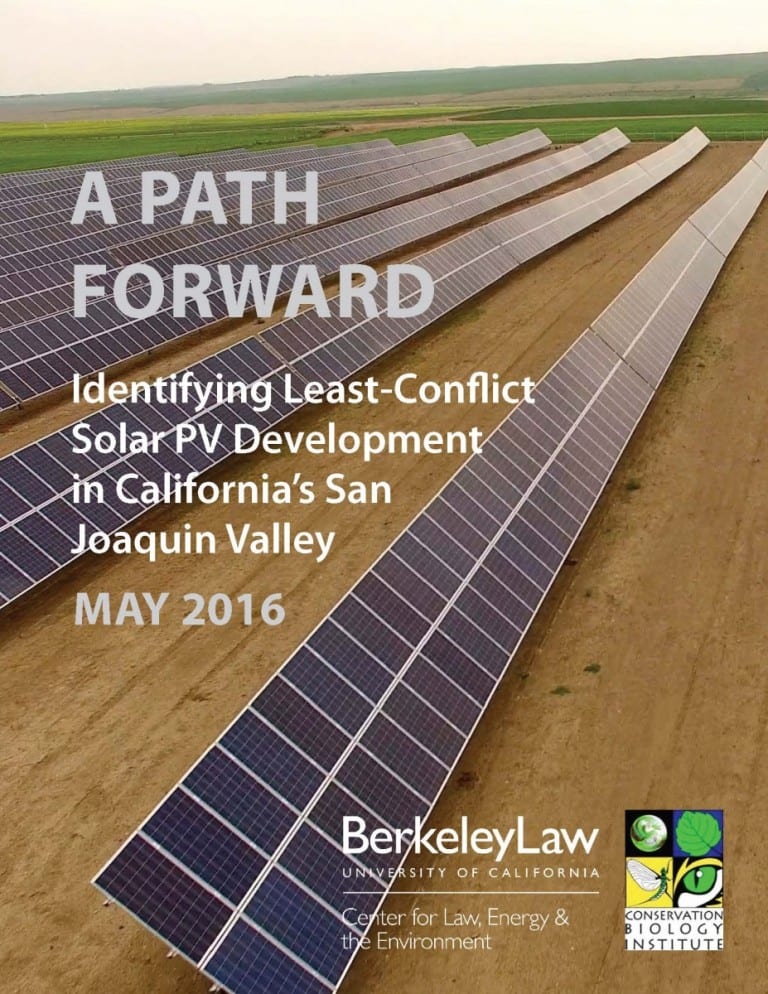 California’s push to achieve 50 percent of our electricity from renewable sources by 2030 will entail a significant deployment of large-scale solar photovoltaic (PV) installations. But in places like the San Joaquin Valley, proposed installations have engendered conflicts with agricultural and conservation groups, who fear a resulting loss of valuable lands and the species and farming and ranching that depend on them. Berkeley Law’s Center for Law, Energy and the Environment (CLEE) partnered with Conservation Biology Institute (CBI) and Terrell Watt Associates to develop a new process to find “least-conflict” lands in the eight-county San Joaquin Valley region. Californians send 30 million tons of waste to landfills annually. While reduction, recycling and composting can do their part, not all types of materials can be practically and economically recycled in an environmentally beneficial manner. This leftover trash stream may therefore present an opportunity to recover energy, using new and possibly cleaner technologies. However, California lacks an agreed-upon set of standards for measuring and balancing the life-cycle costs and benefits of various waste management methods, including energy conversion. This report recommends solutions for the state to address this challenge. Local governments are the primary permitting entities for renewable energy generation facilities in California. Despite the recent surge in the renewable energy market, California’s diverse communities are at different stages in establishing planning and permitting programs, and all communities can work to facilitate faster development of this vital sector. This guidance document, with model general plan policies, was created for the Governor’s Office of Planning and Research (OPR). The goal is to help local governments streamline their permitting processes for two types of distributed renewable energy projects. This three volume series of reports analyzes steps that federal agencies can take to mitigate climate change under existing laws. A collaboration between CLEE and the Berkeley Energy and Climate Institute, this series details how the Department of the Interior (DOI), Federal Energy Regulation Commission (FERC), and the U.S. Department of Agriculture (USDA) can use their legal authority to reduce greenhouse gas emissions and expand clean energy use across the country.

Renewable Energy Beyond 2020: Next Steps for California California is on pace to meet its goal of securing 33 percent of the state’s electricity from renewable sources like solar and wind by 2020, but energy experts report that the in-state market for renewable energy will lose momentum without new policies to encourage deployment beyond 2020.

Key policy recommendations: a new renewable energy target for 2030 that accounts for greenhouse gas emissions and tracks the state’s long-term climate change goal, comprehensive planning for renewable deployment to occur in the most efficient and cost-effective manner, incentives to encourage utilities and renewable developers to realize this vision. California has one of the most ambitious renewable energy programs in the country, with a target of procuring 33 percent of its electric energy from renewable sources by 2020. Governor Jerry Brown has raised the bar even higher, calling for California to reach and surpass the 33 percent target by developing 12,000 megawatts of local renewable energy. This report summarizes the concerns, observations and suggestions of Conference participants and other stakeholders for clearing a path toward the 12,000 megawatt goal. Net Metering is a policy that allows commercial and residential electricity customers to receive credits on their utility bills for on-site renewable energy generation in excess of their electric load that is exported to the state’s electric grid. Recently, California’s net metering program has been called into question by some electric utilities, most noticeably, the San Diego Gas & Electric Company (SDG&E). This paper addresses these important questions about the net metering program, as well as the implication that the costs associated with the program outweigh the benefits. California will need to steer the development of large-scale renewable energy facilities on agricultural land toward lands that do not deplete the state’s prime agricultural and biological resources.

Key policy recommendations: develop criteria for the most suitable agricultural lands for renewable energy deployment, expedite environmental review and endangered species permitting for projects on these lands, and coordinate state and local land use planning and transmission investments to encourage development on these sites. Agricultural businesses can play a key role in reducing greenhouse gas emissions associated with farming in California, while saving themselves money in the process. In the short-term, agriculture leaders can adopt immediate cost-effective practices to reduce GHG emissions, while in the long-run policy makers must assist with industry efforts.

In Our Backyard: How to Increase Renewable Energy Production on Big Buildings and Other Local Spaces