Transportation emissions are the number one source of greenhouse gases in California and many other advanced economies. Our reports present options to reduce these emissions, with a focus on clean fuels through greater adoption of zero-emission vehicles and use of low-carbon biofuels, as well as for reducing the need for driving through enhanced public transit options and improved freight delivery systems. The global transition from fossil fuel-powered vehicles to battery electric vehicles (EVs) will require the production of hundreds of millions of batteries. This massive deployment frequently raises questions from the general public and critics alike about the sustainability of the battery supply chain, from mining impacts to vehicle carbon emissions. The global transition from fossil fuel-powered vehicles to battery electric vehicles (EVs) will require the production of hundreds of millions of batteries. This massive deployment frequently raises questions from the general public and critics alike about the sustainability of the battery supply chain, from mining impacts to vehicle carbon emissions.
CLEE and the Natural Resource Governance Institute are collaborating on a research initiative to identify governance solutions to these questions. Our new FAQ document describes the structure of the supply chain and addresses key sustainability risks. California and France have taken leading steps in supporting the transition to electric vehicles (EVs), but each has substantial progress ahead to reach full adoption. What can these jurisdictions learn from each other’s successes and challenges to make EVs convenient and accessible to urban residents?

To explore these questions, speakers at our June 2019 international conference at UC Berkeley on electric vehicles and global urban adoption, co-sponsored by CentraleSupélec and Florence School of Regulation (FSR) in France, described lessons learned for electric vehicle deployment in France and California.

Based on the discussion, UC Berkeley Law’s Center for Law, Energy and the Environment (CLEE) released the symposium brief: Electric Vehicles and Global Urban Adoption: Policy Solutions from France and California. Freight is responsible for hundreds of thousands of jobs in California and feeds commerce and agriculture throughout the state and the entire nation. But the trains, trucks, aircraft, and ocean vessels that ship goods throughout California are responsible for a disproportionate amount of greenhouse gas emissions and harmful air pollutants.

California’s freight system leaders will need to maximize its efficiency to retain this position of prominence while protecting California residents and workers. The recommendations outlined in Streamlining Sustainability can help California achieve its ambitious emission reduction, public health, and economic competitiveness goals. buildings, offices, and roads, to reduce the amount of overall traffic the projects generate. To facilitate compliance with this new requirement under Senate Bill 743 (Steinberg, 2013), some state and local leaders seek to create special “banks” or “exchanges” to allow developers to fund off-site projects that reduce driving miles, such as new bike lanes, transit, and busways.

Some countries and states, including California, are contemplating or making plans for phase-outs or bans on the sale of new internal combustion engine passenger vehicles by a date certain. Such a phase-out would be critical to achieving long-term climate goals and improving public health.

In California, the state will eventually need full consumer adoption of zero-emission vehicles in order to achieve legislated long-term climate goals. To that end, Governor Brown set a goal of reaching five million zero emission vehicles (ZEVs) on California’s roadways by 2030, including 250,000 public chargers by 2025, and as of mid-2018, Californians were driving over 400,000 electric vehicles.

100% Zero identifies key challenges and solutions to achieving a scenario in which 100 percent of new vehicle sales are zero-emission, based on a convening of expert stakeholders. Transitioning freight transportation to zero-emission technologies, such as battery electric and hydrogen
fuel cells, would yield substantial environmental, equity, and public health benefits. However, various regulatory technological, and financial barriers hinder the achievement of these goals. To address the challenges and policy solutions to achieve zero- emission freight at the Southern California ports, UCLA Law’s Emmett Institute on Climate and Environment and the Center for Law, Energy & the Environment (CLEE) hosted a conference at UCLA on June 8, 2018, Toward Zero-Emission Freight at Southern California’s Ports.

Our Summary Report outlines the main challenges and opportunities suggested in this day-long conference.

Delivering the Goods: How California Can Create the Sustainable Freight System of the Future California’s freight system is responsible for 1/3 of statewide jobs, as well as a major source of both greenhouse gas emissions and local air pollution in the state. New innovations in technology and infrastructure have the potential to improve efficiency and reduce pollution, but policy and industry support will be essential to achieve California’s environmental goals.

Key findings: Our report identifies an expansive group of new freight transportation technologies and infrastructure developments and the policy innovations needed to make them reality in California.

Plugging Away: How to Boost Electric Vehicle Charging Infrastructure California will need widespread consumer adoption of electric vehicles (EV) in order to achieve the state’s environmental and energy goals. But achieving these goals will require a significant boost to EV charging infrastructure, particularly in workplaces, multi-unit dwellings, and fast charge “plazas.”

Key policy recommendations: expanded utility investments, at least up to the wiring of new charging stations; reform of commercial electricity rates to encourage more optimal charging times and locations based on grid needs; and expedited permitting and energy data access for charging stations in the most strategic locations to boost EV adoption. Transportation fuels from fossil sources represent the single largest source of carbon emissions in California. Low-carbon biofuels, which are derived from agricultural sources as well as alternative sources such as algae and food, reduces petroleum fuel consumption as a substitute fuel. Yet California is missing opportunities to produce more of this biofuel locally, with attendant environmental and economic benefits.

Also see the webinar and Op-Ed in the Sacramento Bee accompanying the release of this report.

Our  analysis of California’s rail transit systems discovers which transit Also see our op-ed in the San Diego Union-Tribune. 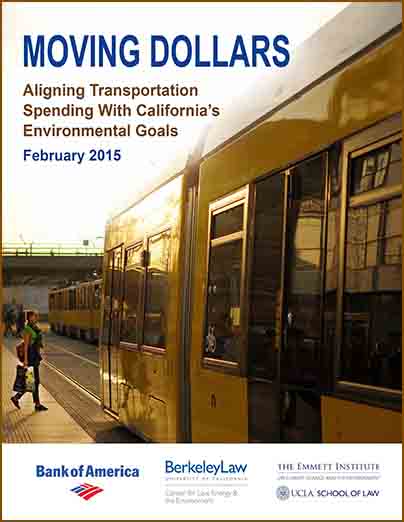 governments spend roughly $28 billion each year on transportation, with the majority of the funding for highways and other auto-oriented infrastructure. Yet state laws related to greenhouse gas reduction, more compact real estate development, and multimodal transportation options, such as walking and biking, necessitate reductions in vehicle miles traveled.

Electric Vehicle Paradise: How Hawaii Can Lead the World in Deployment High energy costs, significant adoption of residential and commercial solar photovoltaic panels to reduce electricity costs, and limited driving range due to the island geographies make Hawai‘i a logical fit for mass electric vehicle adoption. This report summarizes the overarching barriers and opportunities for mass electric vehicle deployment in the state and assesses the specific challenges and opportunities on each the islands.

A High Speed Foundation: How to Build a Better California Around High Speed Rail California will soon begin construction of a proposed high speed rail system in the San Joaquin Valley, which will ultimately connect to Los Angeles and San Francisco. If implemented poorly, however, the system could lead to unchecked development in the Valley that could increase traffic, exacerbate the loss of farmland, and generate more air pollution.

Key policy recommendations: a Valley-wide collaborative to create a plan for economic growth and environmental preservation around the high speed rail network, support for local planning and mitigation efforts to implement it, and new financing mechanisms to catalyze private investment in station-connected development.

Electric Drive by ’25: How California Can Catalyze Mass Adoption of Electric Vehicles by 2025 Long term, mass consumer adoption of electric vehicles will help California meet its renewable energy and greenhouse gas goals while boosting the economy with domestically produced fuel (in the form of electricity) and sales from California-based electric vehicle companies and suppliers.

Key policy recommendations: Industry and policy-maker coordinated education and outreach campaign about the consumer benefits of electric vehicle technology, reduced taxes and fees to lower the upfront cost of the vehicles, and a well-planned and coordinate public charging infrastructure.

Also see our webcast lunch briefing accompanying the release of this report.

All Aboard: How California Can Increase Investments in Public Transportation A well-funded and comprehensive public transit system in California could help the state reduce greenhouse gas emissions associated with driving and save residents and businesses time and money.