Skip to content
Home » Research » Center for Law, Energy & the Environment » For Prospective Students » CLEE Scholars
The CLEE Scholars Program is a merit-based scholarship to incoming students that have demonstrated an interest/commitment to environmental or energy law. The scholarship continues for the duration of the student’s time in law school. CLEE provides additional support in the form of small informal events and one-on-one career guidance. 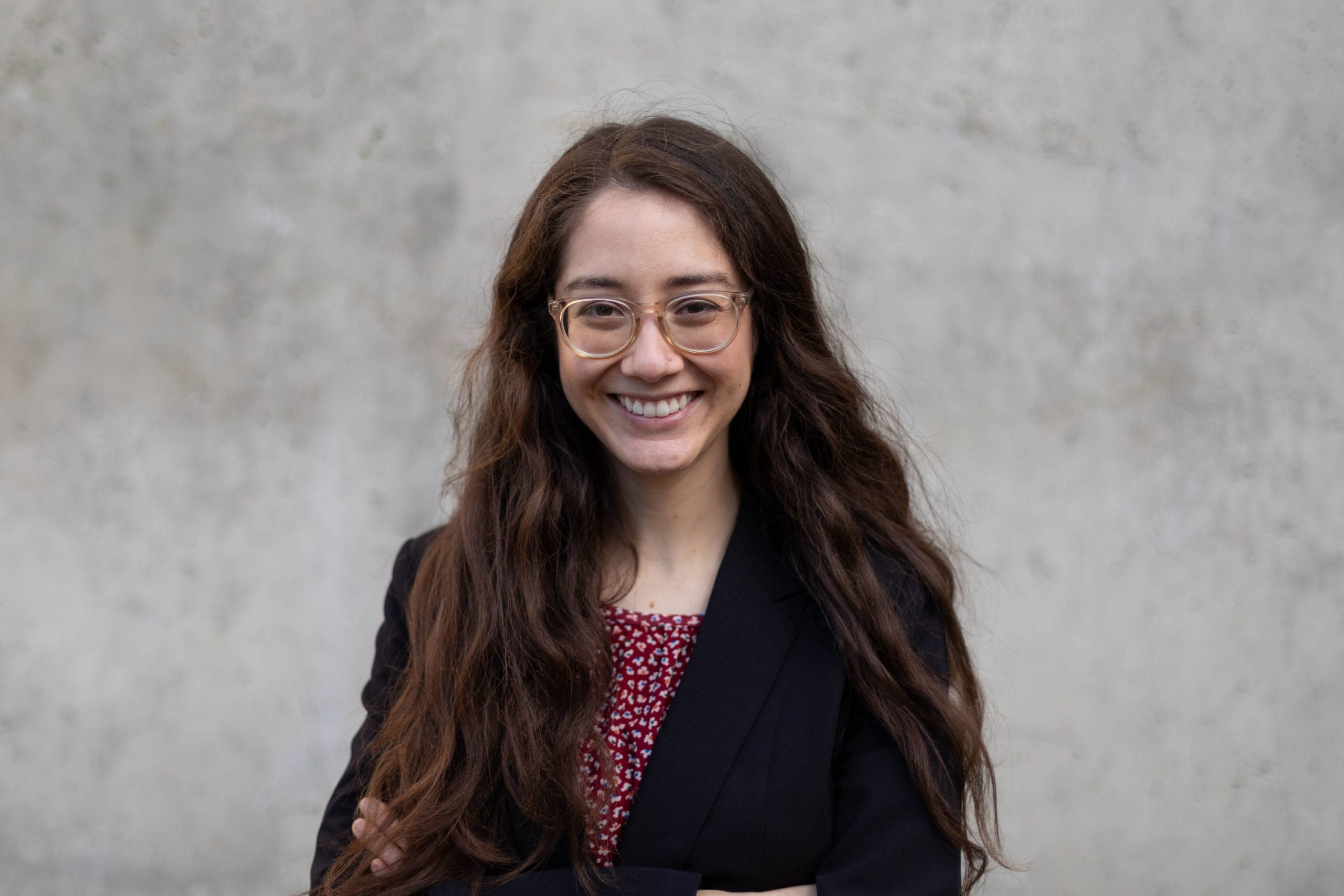 Born and raised in California’s rural Central Valley, Geraldine is interested in exploring the intersectional laws and policies driving water distribution and equitable water access. Geraldine is a proud Double-Golden Bear who received B.A. and B.S. degrees in Geography and Society and Environment at UC Berkeley. After discovering her passion for public service as an undergraduate student, she relocated to Southern California to work for a nonprofit organization dedicated to improving the foster youth program experience throughout the United States. She eventually made her way back to the environmental movement and joined Los Angeles Waterkeeper as a grant writer to fight for clean, safe, and drinkable water for all Angelenos.

At Berkeley Law, Geraldine is an active member of Ecology Law Quarterly, the Wage Justice Clinic, and La Alianza Law Students of Latin American Descent. When she is not at home taking care of her plants, Geraldine enjoys sampling the Bay Area’s best vegan eats and coffee shops. She is thrilled to be back at Berkeley and excited to contribute to the environmental law community as a CLEE Scholar! After growing up in Connecticut, Kevin moved out west to attend the University of Southern California. There, he studied Chemical Engineering and was interested in helping the energy industry evolve. After college, Kevin eventually transitioned to environmental regulatory work. As an Air Quality Engineer for a government agency in Southern California, he developed a deep respect for attorneys who worked on cases that made a noticeable impact. Kevin came to law school so he could make similar differences through his work. He is now exploring his interests in Environmental and Energy Law, Criminal Law, and Business Law. In his free time, Kevin enjoys almost all sports, hiking, the beach, and playing video games. Ashley Donovan is from Thousand Oaks, California. She went to The University of Texas at Austin, where she majored in history and minored in business foundations. She was involved with the Liberal Arts Honors program, where she specialized in public policy. Through this program, she learned of the environmental justice issues plaguing the world. Ashley decided to attend law school so that she could represent communities suffering from environmental racism and sexism. She also has an interest in climate change law and policy and is looking forward to participating in research on that topic. She has previously worked for Environment Texas and the Havasi Wilderness Foundation as an environmental advocate and policy intern. At Berkeley Law, Ashley is excited to participate in the Ecology Law Quarterly and the Center for Law, Energy, and the Environment. In her spare time, she enjoys taking yoga classes, hiking, volunteering at her local animal shelter, and spending time with her dogs. Elias Garcia (he/him/his) is a first-year law student from Los Angeles, California. He is interested in using his legal education to explore the intersection of race, socioeconomic class, and environmental policy.

Elias is a graduate of Tulane University, where he received a B.A. in environmental studies and political science with minors in Latin American studies and gender & sexuality studies. After receiving his undergraduate degree, Elias served as a Peace Corps Volunteer in Tlaxcala, Mexico. As a Peace Corps Volunteer, he worked with SEMARNAT, the Mexican government’s principal environmental agency, to implement education programs for rural communities, focusing on climate change, local biodiversity, and waste management. He later worked as a communications consultant for the International Maize and Wheat Improvement Center, a public-interest, agricultural research center near Mexico City. At Berkeley Law, Elias is involved with Ecology Law Quarterly, La Alianza – Law Students of Latin American Descent, and Queer Caucus. He is also a student advocate with the Alianza Workers’ and Tenants’ Rights Clinic, a student-initiated legal service project (SLP) run in collaboration with Centro Legal de la Raza. Taylor Graham (he/him/his) is a first-year law student at UC Berkeley School of Law. He is a student researcher for the Native American Legal Assistance Project and a member of the Ecology Law Quarterly. This semester, he is actively involved in a model legislation project with Berkeley’s Center on Reproductive Rights and Justice.

Before coming to Berkeley, Taylor was a documentary filmmaker. He was named as a National Geographic Explorer for his work, which focused on the nexus of water justice and climate change in the American Southwest. He also worked for the nonprofit Utah Rivers Council, where he researched and reported on water policy challenges in Utah while supporting organization legislative initiatives.

Taylor grew up in Durango, Colorado, where he developed an appreciation for the complex environmental justice issues affecting the Four Corners region and the Colorado Plateau. This coming summer, Taylor will be a judicial extern for the Honorable Jaqueline Nguyen on the Ninth Circuit Court of Appeals. A native of Colorado, Phalen grew up amidst the Rocky Mountains and developed a deep passion for nature and protecting the environment. This inspired her to pursue a BS in Wildlife and Conservation Biology from Colorado State University where she was part of the University Honors Program and the Honors Undergraduate Research Scholars Program. She conducted research on Song Sparrow feather structure and thermoregulation on the California Channel Islands and presented it at both national and local conferences. She also spent three months in the rainforest of Northern Queensland, Australia using Geospatial Information Systems to map and track the success of community revegetation projects in order to improve the planting and monitoring protocols used by the community. While conducting these research projects, she became interested in the societal structures that surround environmental protection which led to an added passion for environmental law and policy. She hopes to utilize both her scientific technical knowledge and developing legal education to work towards innovative and effective solutions to the pressing environmental issues of today. In her free time, she enjoys nearly any outdoor activity, particularly hiking, and has climbed nine of Colorado’s tallest 14,000-foot peaks. When indoors, she can often be found playing cello, watching Netflix, or reading to her heart’s content. Madison is a 2L from Oakdale, California in the Central Valley. She graduated from the University of Pennsylvania in 2017 where she studied Philosophy, Politics, and Economics. While at Penn, Madison became involved in various politics and policy focused student groups and gained experience in community organizing and campaigning in the West Philadelphia community. Through the Penn in Washington program, Madison had the opportunity to spend a semester in DC interning at the Environmental Protection Agency in the Office of Public Engagement. Through this experience, Madison decided to further pursue future careers in environmental law and policy, which let her back to California to attend Berkeley Law.

Madison grew up spending a lot of time outdoors, between day trips to Yosemite and quiet floats down the Stanislaus river. After law school, Madison hopes to pursue a career in environmental law in some capacity, with a focus on water law and policy issues specifically in the Central Valley. She is excited for any opportunity to give back to the valley and address the issues that led her to choose this career path. At Berkeley Law, Madison is a member of Environmental Law Quarterly, Students for Economic and Environmental Justice, and the student led Environmental Conservation Outreach pro-bono project. Joya is a 2L particularly interested in the intersection between environmental and humanitarian issues. After receiving a Bachelor of Science in Society and Environment at UC Berkeley’s College of Natural Resources, she worked with asylum seekers in Greece and was inspired to attend law school in order to gain the skills necessary to combat climate injustice on a structural level and more effectively aid displaced populations.

Originally from San Diego county, Joya loves exploring the Bay Area, playing music, and cats. At Berkeley Law, she is a member of the Ecology Law Quarterly, the International Refugee Assistance Project, and the Pro BoNotes acapella group! She is honored to be a CLEE scholar and eager to continue her involvement in the environmental community at UC Berkeley. Nadia is a graduate of the Business Honors Program at the University of Texas at Austin where she majored in International Business. After spending time in Latin America during study abroad, she developed a passion for rainforest conservation and wrote multiple papers on the environmental impacts of animal agriculture in the tropical regions of Brazil and Argentina. She also hosted a radio talk show focused on sustainability issues in the food system. After graduating, she worked as a legal assistant in a real estate law firm, where she developed an interest in agricultural land use in the rapidly developing parts of rural Texas. She also worked part-time in sustainability for a vacation rental services company on the Texas Gulf Coast. Érida Tosini-Corea is a 2L pursuing her J.D. at Berkeley Law. She is a member of two student-initiated legal services projects: Environmental Conservation Outreach (ECO) and the Reproductive Justice Project. Her legal interest is in the intersection of land and environmental rights. Prior to entering law school, Érida was a Tenants’ Rights Counselor and Organizer at Causa Justa :: Just Cause, a housing rights organization in Oakland, CA. Additionally, she was a Fulbright English Teaching Assistant in Belém, Brazil and worked as an intake coordinator at the Legal Aid Society of Washington, DC. Érida received her B.A. in Sustainable Development and Political Science from Columbia University. Wyatt Williams is a Agai Dicutta Paiute from the Walker River Paiute Tribe in Northern Nevada where he grew up hunting, fishing, and ranching with his community.

He is interested in tribal sovereignty, environmental justice, and sustainable economic development. These interests led him to study renewable energy development, project finance, water law, agriculture, cultural sovereignty, and general nation-building. Wyatt has worked in tribal governments as well as federal environmental lobbying. He hopes to use this background and his legal education to assist tribes in leveraging resources and developing social programs on their own cultural terms.

Wyatt studied Native American Studies and Public Policy at Dartmouth College. He intends to complete the Energy and Clean Technology Certificate with the Center for Law, Energy, and the Environment.