The following educational resources are intended as introductions to topics on legal history. These research resources for teachers and students are meant to emphasize the importance of primary source documents.

Many of these resources are based on exhibits the Robbins Collection has previously developed. For more information, you can view the exhibits here.

To view a specific educational resource, simply click on the title. 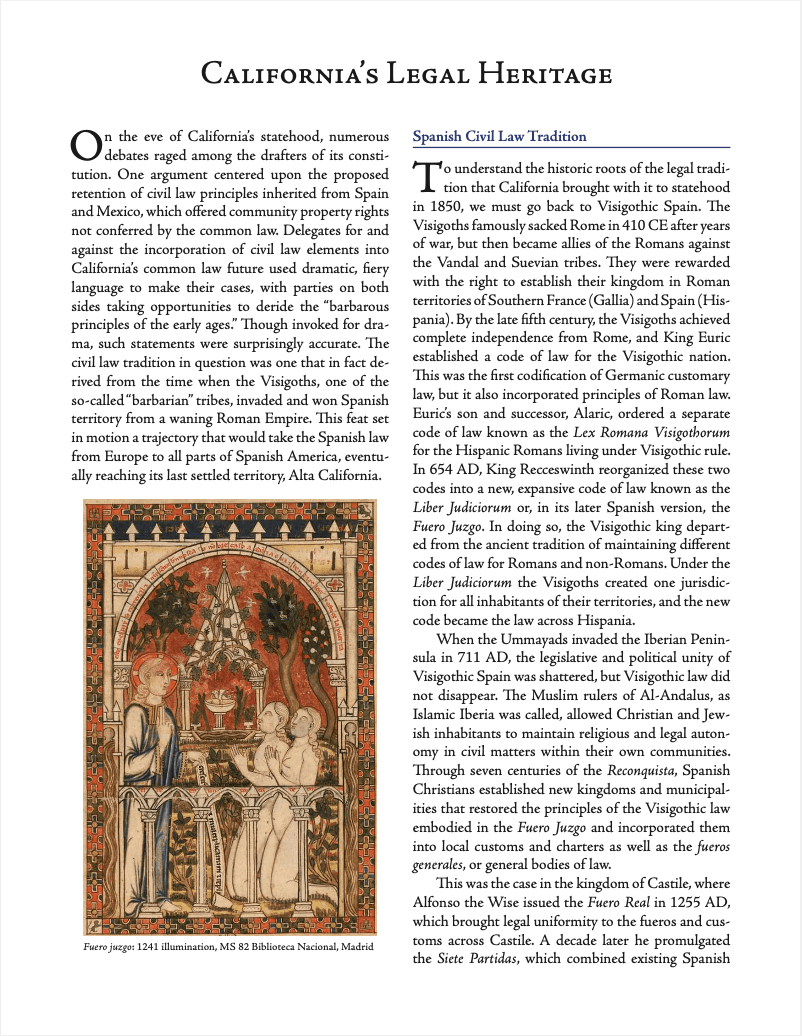 On the eve of California’s statehood, numerous debates raged among the drafters of its constitution. One argument centered upon the proposed retention of civil law principles inherited from Spain and Mexico, which offered community property rights not conferred by the common law. Delegates for and against the incorporation of civil law elements into California’s common law future used dramatic, fiery language to make their cases, with parties on both sides taking opportunities to deride the “barbarous principles of the early ages.” Though invoked for drama, such statements were surprisingly accurate. The civil law tradition in question was one that in fact derived from the time when the Visigoths, one of the so-called “barbarian” tribes, invaded and won Spanish territory from a waning Roman Empire. This feat set in motion a trajectory that would take the Spanish law from Europe to all parts of Spanish America, eventually reaching its last settled territory, Alta California.

The Aftermath of Colonialism 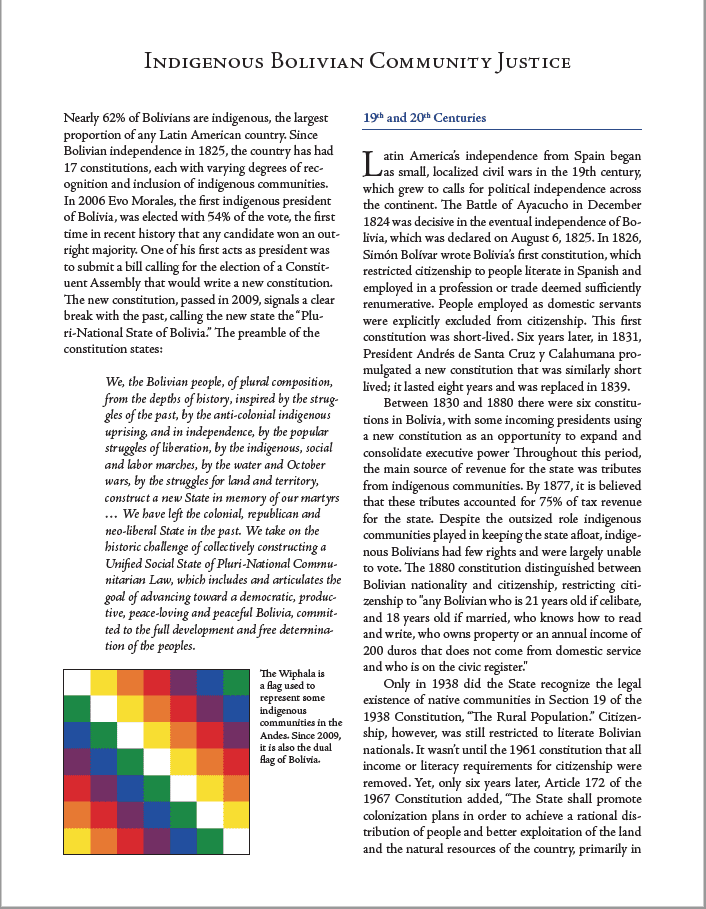 Nearly 62% of Bolivians are indigenous, the largest proportion of any Latin American country. Since Bolivian independence in 1825, the country has had 17 constitutions, each with varying degrees of recognition and inclusion of indigenous communities. In 2006 Evo Morales, the first indigenous president of Bolivia, was elected with 54% of the vote, the first time in recent history that any candidate won an out- right majority. One of his first acts as president was to submit a bill calling for the election of a Constituent Assembly that would write a new constitution. The new constitution, passed in 2009, signals a clear break with the past, recognizing indigenous rights to a degree the country had never seen before. This educational resource shows the trajectory of indigenous rights in Bolivia from independence to today, especially the right to indigenous community justice. 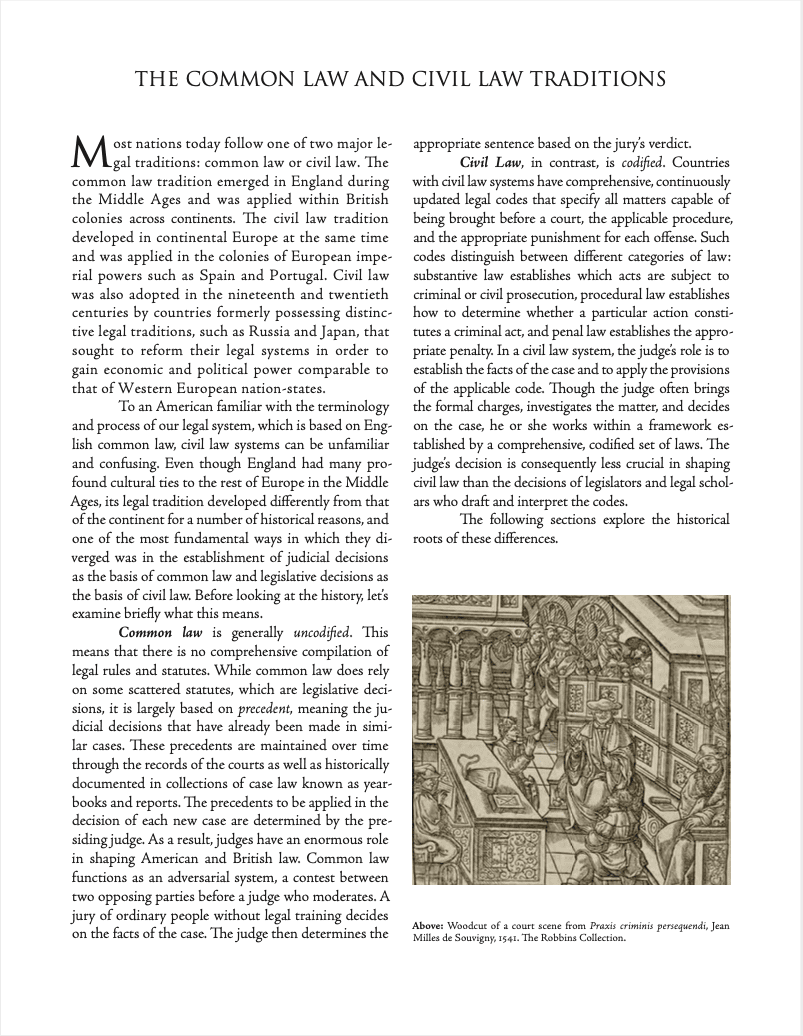 Most nations today follow one of two major legal traditions: common law or civil law. The common law tradition emerged in England during the Middle Ages and was applied within British colonies across continents. The civil law tradition developed in continental Europe at the same time and was applied in the colonies of European imperial powers such as Spain and Portugal. Civil law was also adopted in the nineteenth and twentieth centuries by countries formerly possessing distinctive legal traditions, such as Russia and Japan, that sought to reform their legal systems in order to gain economic and political power comparable to that of Western European nation-states. This resource covers the development of common law and civil law, and the distinctions between the two. 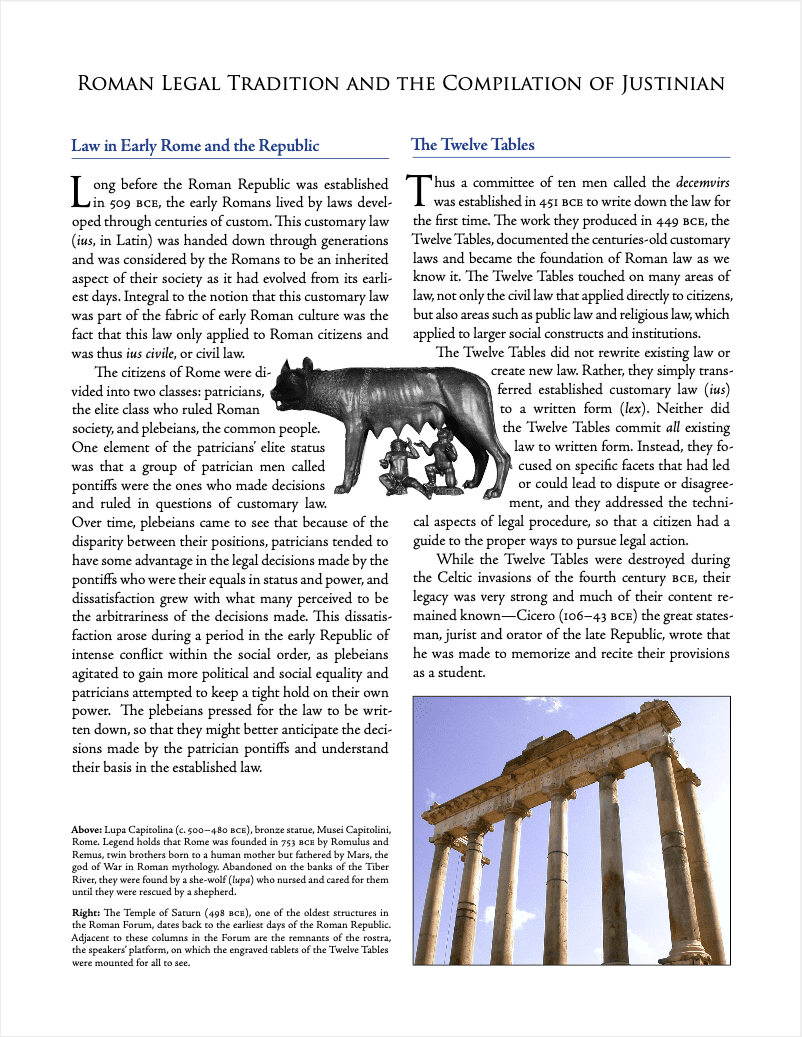 Long before the Roman Republic was established in 509 BCE, the early Romans lived by laws developed through centuries of custom. This customary law (ius, in Latin) was handed down through generations and was considered by the Romans to be an inherited aspect of their society as it had evolved from its earliest days. Integral to the notion that this customary law was part of the fabric of early Roman culture was the fact that this law only applied to Roman citizens and was thus ius civile, or civil law. This resource explores how Roman law developed and was eventually compiled by Justinian I into the Corpus iuris civilis, a foundational source for Western legal traditions. 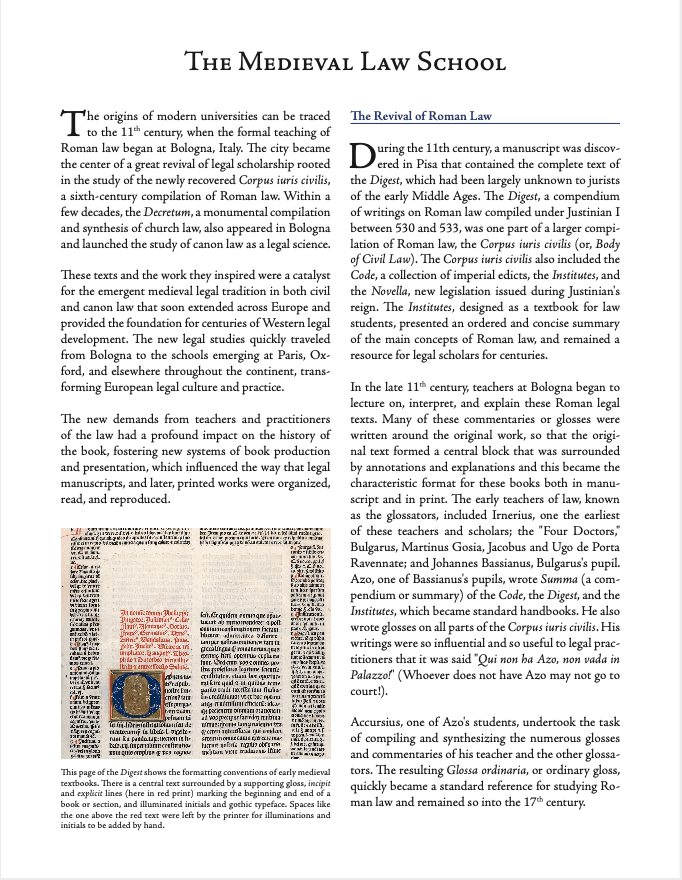 The advancement of medieval jurisprudence was a driving force in the development of universities in the Middle Ages, as the legal revival at Bologna made its way, via the greatest professors of the time, to schools emerging in Paris, Oxford, and throughout the European continent. Inevitably, the expansion of legal education transformed legal culture and practice. Medieval law texts and commentaries increasingly focused on procedural and practical elements of law, reflecting the professionalization of civil and canon lawyers and the importance of knowledge in both areas of law for practitioners. Growing demand for both legal teaching and practice also had a profound impact on the history of the book, fostering new systems of book production and presentation that influenced the way that legal manuscripts, and later, printed works, were organized, read, and reproduced for centuries thereafter.

The Robbins Collection and Research Center offers periodic in-person workshops for K-12 educators in the Bay Area on a variety of topics in legal history. Participants have the opportunity to engage with primary sources from the extensive holdings of the Robbins Collection Library.

The Robbins Collection reading room is open to the public for limited hours. Please check here for more information.