Our video exhibit, Witch Trials in Early Modern Europe and New England was adapted from material included in our Famous Trials and their Legacy exhibit, held from August 14–September 20, 2008. The video is available at the bottom of the page, below the text and images from the original exhibit.

Historians have identified a number of crucial legal developments that led to the panic surrounding— and subsequent trials of— witches in Early Modern Europe. One was the idea of “heretical fact,” put forth by Pope John XXII (1316-1334), which allowed heresy to be viewed as a deed and not just an intellectual crime. Another step was the establishment of a link between witchcraft and heresy, a link that had not existed before the end of the 15th century, which emerged thanks to a new theory of “diabolical witchcraft” that held that the practice of malefice (such as using religious objects to curse one’s neighbor) in fact involved an active pact with the Devil and was therefore a heretical act and not just a ritual performed by misguided country folk. This view of witchcraft was spread throughout Europe by handbooks like the Malleus Maleficarum. 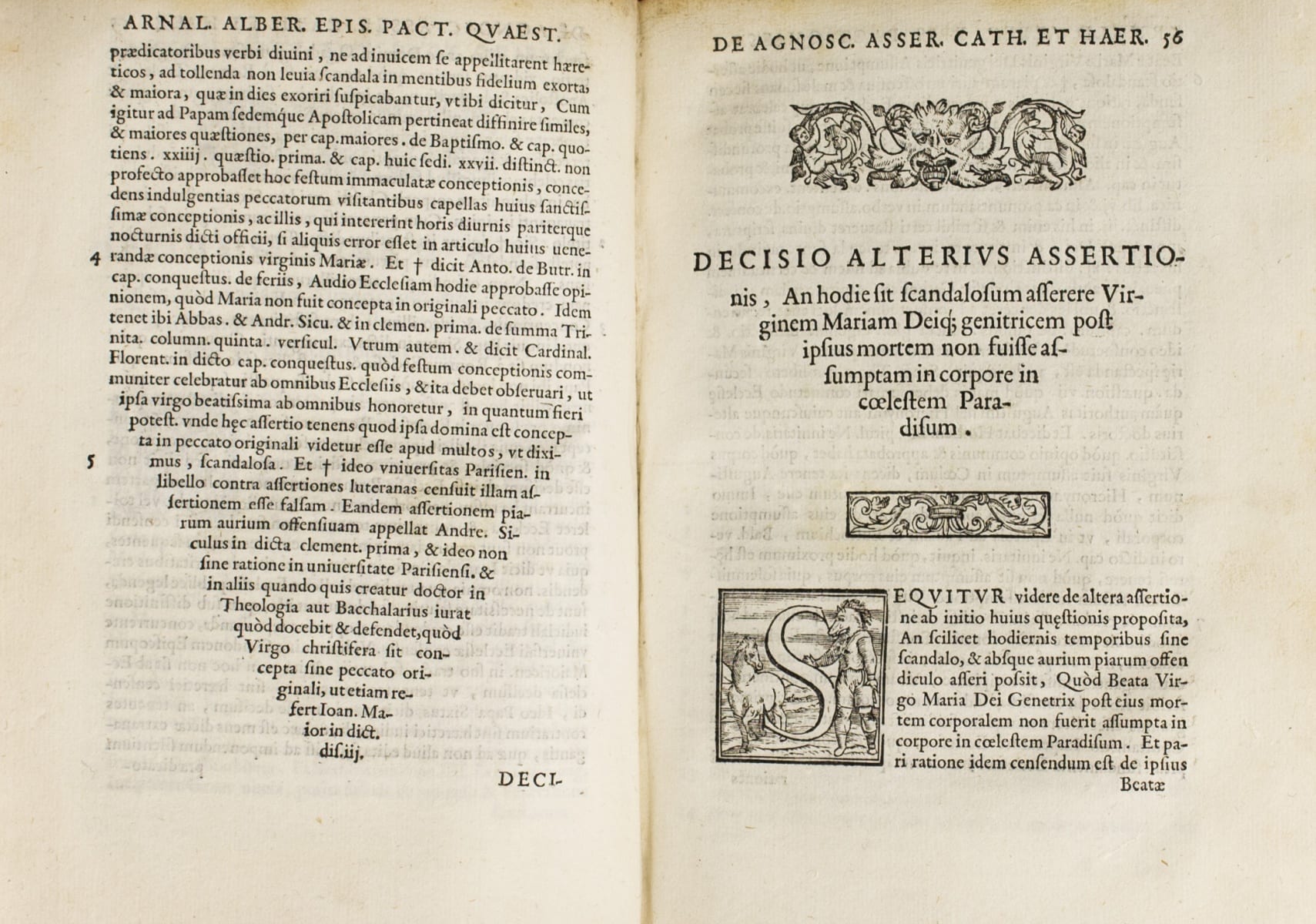 The height of the German witch frenzy was marked by the publication of the Malleus Maleficarum (“Hammer of Witches”), a book that became the handbook for witch hunters and Inquisitors. Written in 1486 by Dominicans Heinricus Institoris and Jacobus Sprenge, and first published in Germany in 1487, the main purpose of the Malleus was to systematically refute arguments claiming that witchcraft did not exist, to refute those who expressed skepticism about its reality, to prove that witches were more often women than men, and to educate magistrates on the procedures that could find them out and convict them. The main body of the Malleus text is divided into three parts; part one demonstrates the theoretical reality of sorcery; part two is divided into two distinct sections, or “questions,” which detail the practice of sorcery and its cures; part three describes the legal procedure to be used in the prosecution of witches. The Malleus was republished 26 times in the Early Modern period and remained a standard text on witchcraft for centuries. 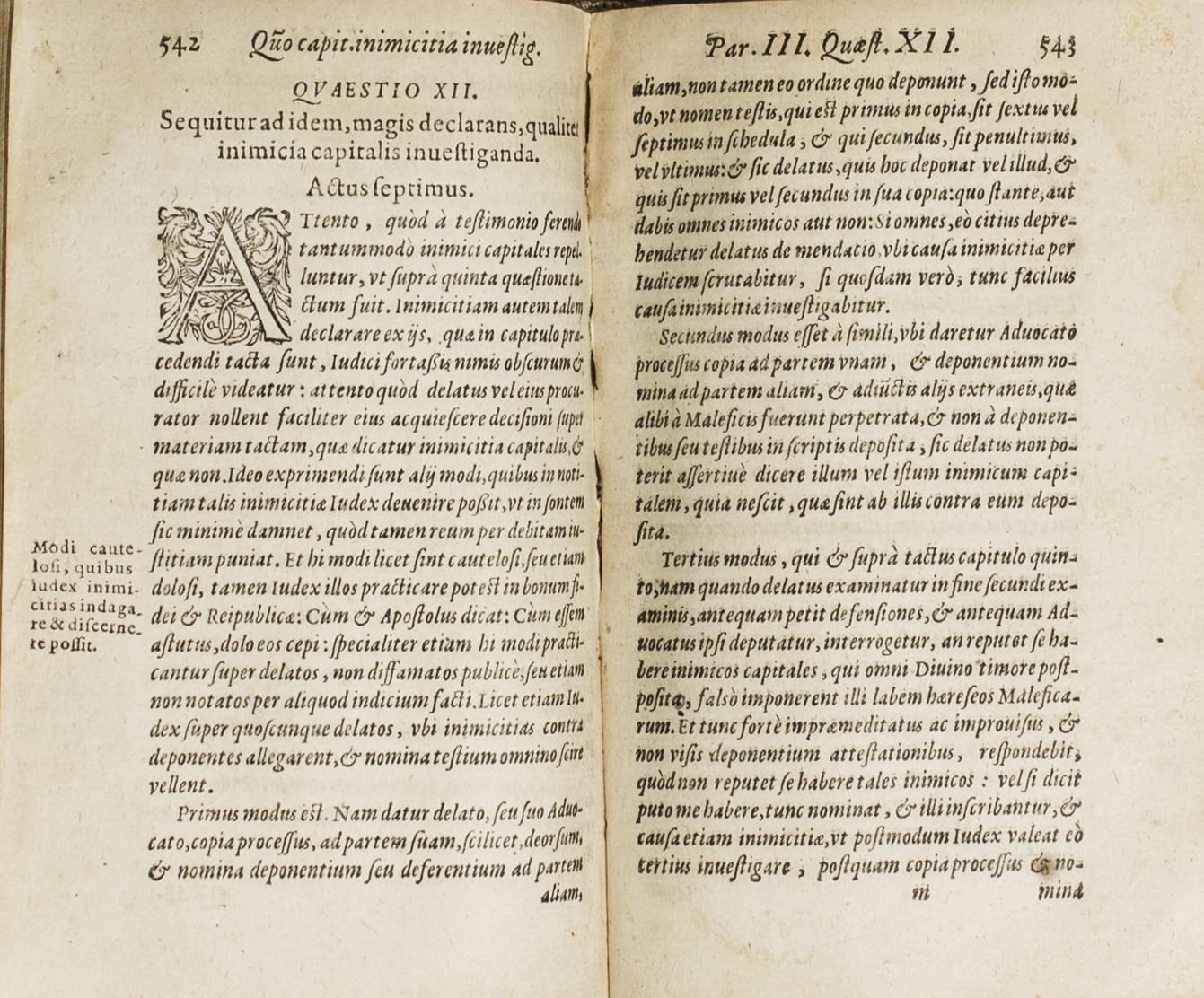 Differences in the development of legal systems in Early Modern Europe had a profound influence on the course the witch trials took in different countries. The relatively few prosecutions of witches in Spain, Italy, and France, for example, can be attributed to the fact that neither the Spanish nor the Roman inquisition believed that witchcraft could be proven. England likewise saw relatively few prosecutions due to the checks and balances inherent in the jury system. It was only in places like Scotland, the Alpine lands, and in South German ecclesiastical principalities that witch panics and actual prosecutions proliferated. In those regions, made up of small, weak states, secular courts actively and successfully prosecuted heresy cases. Another important reason for the active conviction of witches in the German states was the Holy Roman Empire’s adoption of the Constitutio Criminalis Carolina in 1530, which not only instituted prosecution at the judge’s initiative, thus putting the accused witches at the mercy of a magistrate who was at once judge, investigator, prosecutor, and defense counsel, but also provided for the secret interrogation of the accused, denied him or her counsel, required torture in order to extract a confession, and specified that witches be punished with death by burning. 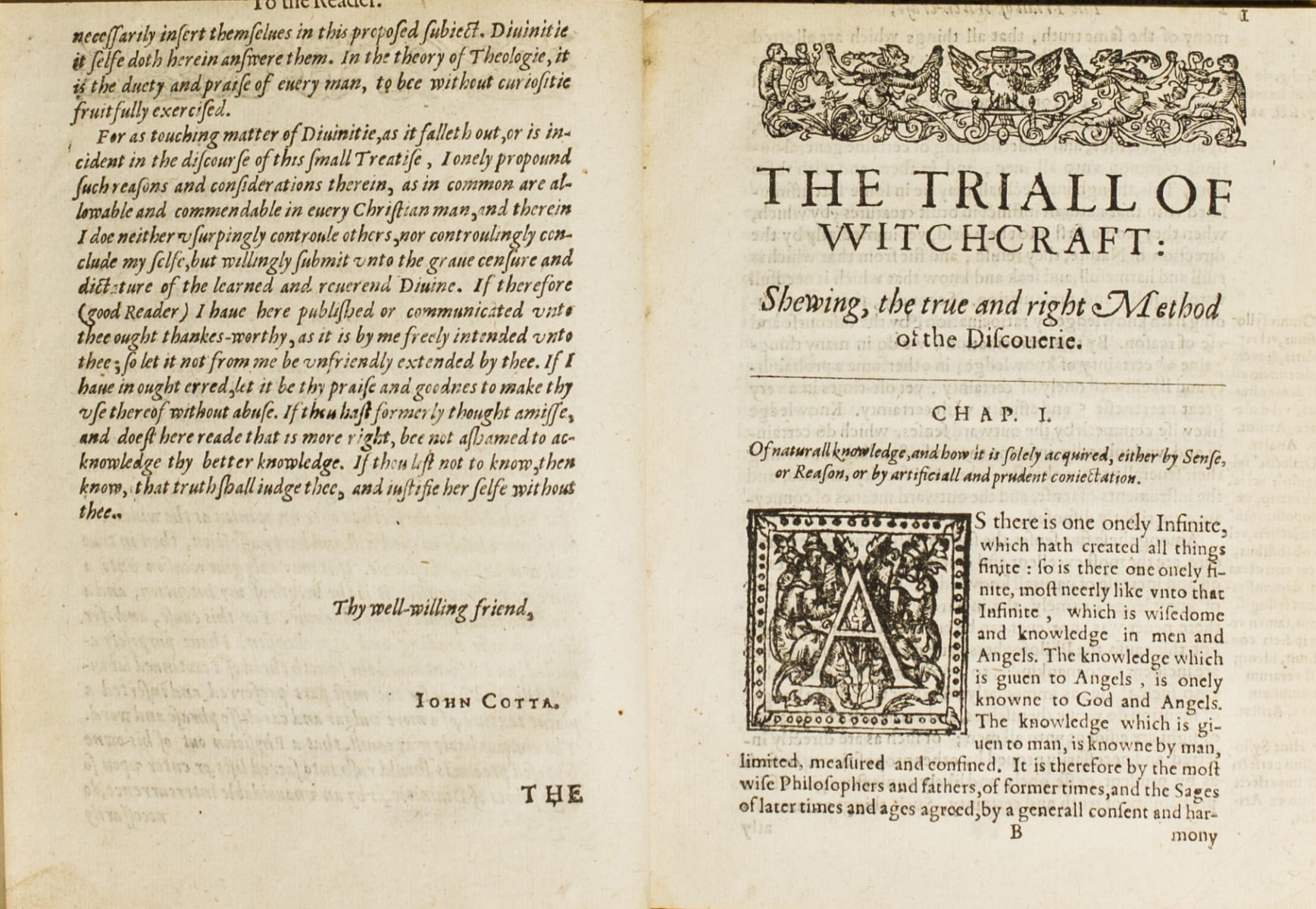 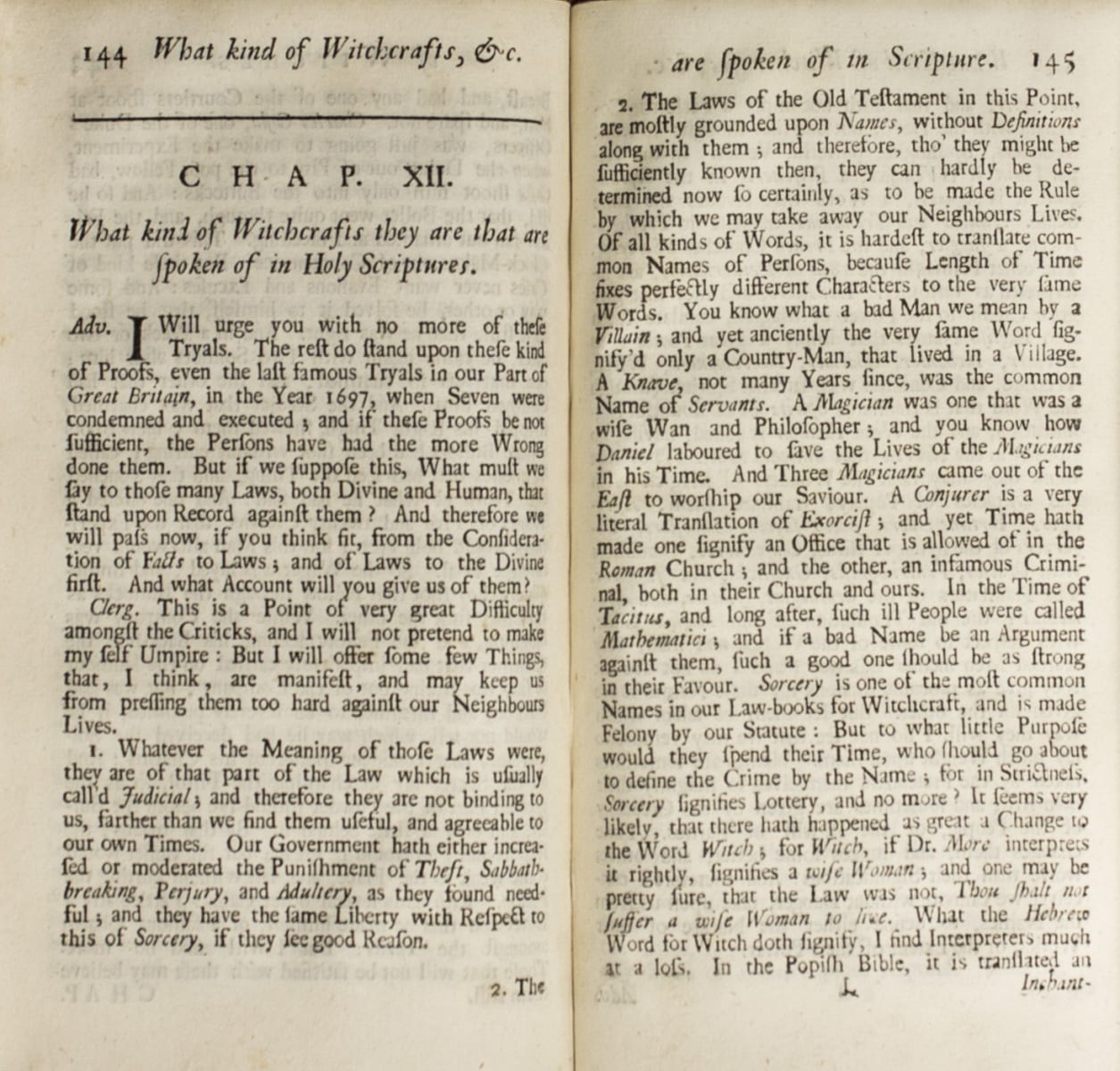 The height of the witch hunting frenzy in Early Modern Europe came in two waves: The first wave occurred in the 15th and early 16th centuries, the second wave in the 17th century. Witch hunts were seen across all of Early Modern Europe, but the most significant area of witch hunting is considered to be southwestern Germany, where the highest concentration of witch trials occurred during the years 1561 to 1670. The 1692-1693 Salem Witch Trials were a brief outburst of witch hysteria in the New World at a time when the practice was already waning in Europe. In February 1692 a girl became ill, and at the same time her playmates also exhibited unusual behavior. When a local doctor was unable to cure the girls, a supernatural cause was suggested and suspicions of witchcraft emerged. Soon three townswomen were accused of witchcraft: Tituba, a slave, Sarah Good, a poor beggar and social misfit, and Sarah Osborne, a quarrelsome woman who rarely attended church. While the matter might have ended there with the three unpopular women serving as scapegoats, during the trial Tituba— possibly to avoid being unfairly prosecuted— declared she was a witch and that she and the other accused women flew through the air on poles. With skeptics silenced, witch hunting began in earnest.

Court of Oyer and Terminer

Before long, accusations of witchcraft abounded and the jails filled with suspects who confessed to witchcraft, seeing it as a means to avoid hanging. The provincial governor created court of “oyer and terminer” which allowed judges to hear “spectral evidence” (testimony by victims that the accused witch’s specter had visited them) and granted ministers with no legal training authority to guide judges. Evidence that would be disallowed today— hearsay, gossip, unsupported assertions— was routinely admitted, while defendants had no right to counsel or appeal. Through the rest of 1692, in a climate of fear, accusations flew, many were convicted, and a number were put to death.

By the fall of 1692 the witch hunting hysteria began to die down as more and more people began to doubt that so many people could be guilty of witchcraft. People urged the courts not to admit spectral evidence and to rely instead on clear and convincing testimony. Once spectral evidence was no longer admissible, acquittals abounded, and the three originally convicted women were pardoned. In May of 1693 the remaining accused and convicted witches were released from prison. Over the course of the Salem witch hysteria, of the 150 people who were arrested and the 26 who were convicted, 14 women and 5 men were executed. The Salem Witch Trials only lasted a little over a year and had very little practical impact on the Colonies at large. However, the trials and executions had a vivid afterlife in the American consciousness, giving rise to a wealth of scholarship and an abundance of cultural artifacts including paintings, novels, plays, and films.