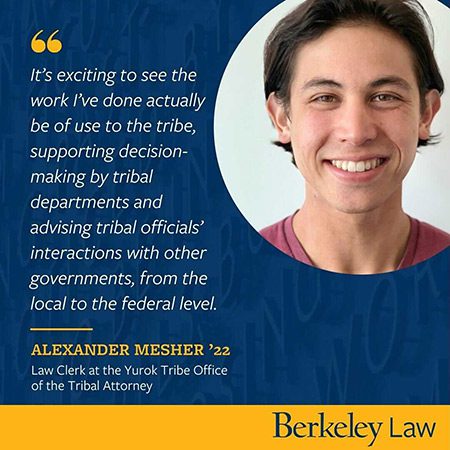 From large firms to nonprofits and government agencies to startups, Berkeley Law students are currently immersed in a dizzying array of enriching jobs. Over the course of the summer, we will present first-person accounts from students who are doing compelling work.

Alexander Mesher ’22 is an ocean enthusiast and environmental justice advocate who studied human impacts on marine ecosystems while earning undergraduate and masters degrees from Stanford in Earth Systems. During summer 2020, he interned with the Environment, Land, and Natural Resources Law Sections of the California Department of Justice – Office of the Attorney General. Before coming to Berkeley Law, he worked as a Climate Corps Fellow purchasing associate with the Alameda County Office of Sustainability, and a research assistant with the Natural Capital Project and National Oceanic & Atmospheric Administration.

Below, Mesher describes his ongoing summer work experience with the Yurok Tribe:

Entering law school, I would not have guessed I’d be working for the Yurok Tribe Office of the Tribal Attorney during my 2L summer.

My background is primarily in climate and marine sciences, and I intended to pursue a career in public interest environmental law. I recognized that tribes are leading the fight against climate change, as well as bearing a disproportionate burden of climate change-driven harms, but I had not envisioned myself working for a tribe.

That changed after I joined the Berkeley Native American Law Students Association as a 1L (I’m not Native, but NALSA accepted non-Native members), helped Berkeley Law host the National NALSA Moot Court Competition, and eventually served as NALSA’s secretary during my 2L year.

I realized that in providing legal services to tribes, I could support Native sovereignty and have the opportunity to work on environmental issues important to tribes. I applied to intern for Yurok, hoping to provide such services for a tribe internationally recognized as a leader in environmental and natural resources management. Six months later, I’m almost done with my summer clerkship there.

Working at Yurok has been an incredible experience. The work is substantively varied, encompassing environmental law, administrative law, contracts, and land use, to name a just a few, though always touching in one way or another on federal Indian law.

Work products range from the strictly legal (drafting contracts and writing memos) to legislative (editing tribal laws) to things that don’t fall into a neat category — say, drafting letters to members of Congress. But beyond doing the work itself, it’s exciting to see the work I’ve done actually be of use to the tribe, supporting decision-making by tribal departments and advising tribal officials’ interactions with other governments, from the local to the federal level.

Additionally, I’ve had numerous opportunities to meet with tribal staff and attend meetings of the Yurok Tribal Council, learning more about how tribal governance works and the pressing issues facing the tribe. I’ve also had the chance to attend the tribe’s morning prayer and song, as well as Yurok language classes. And I’ve been able to get to know several of the tribal attorneys and hear about their unique and interesting paths in a way you typically can’t at a larger legal organization.

All these experiences, though done remotely, have given me a much better sense of what working for a tribal government is like, what kinds of problems tribal attorneys work on, and more generally how legal work can support Native nation-building.

I’ve also learned that while the groundbreaking, national headline-making environmental work that tribes like Yurok do is important, equally important is the everyday work that tribal attorneys do to support the needs and goals of tribal government, and in turn, the wellbeing of the community. It has been fulfilling to see and be a part of that work, and I am deeply grateful to the Office of the Tribal Attorney for giving me the opportunity.

Coming out of this summer, it is my hope that I’ll be able to find work after graduation that similarly joins my goal of doing environmental law with the vital projects of advancing Native sovereignty and supporting Native communities.