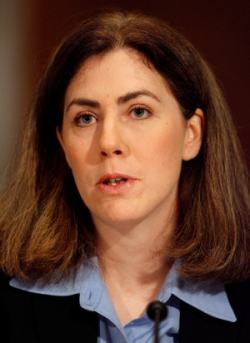 Kassie Siegel ’00 has been named one of California’s 10 most influential lawyers of the decade by the Daily Journal, the state’s largest legal news provider.

Senior Counsel for the Center for Biological Diversity and director of its San Francisco-based Climate Law Institute, Siegel was honored for her pioneering work in securing endangered species protections for the polar bear—the first mammal so designated because of threats posed by climate change.

Siegel wrote the petition and argued the legal case that resulted in the polar bear being protected under the Endangered Species Act in 2008. Under her watch, the Climate Law Institute has won precedent-setting legal victories and become a national leader in climate policy and litigation—working to protect species such as polar bears and walrus in Alaska, pikas in California, and corals in Florida.

“If I was facing extinction, I’d want Kassie Siegel as my lawyer,” said Patrick Parenteau, a Vermont Law School professor and institute board member. “Kassie has already left her mark on environmental law, and she’s just getting started.”

Before attending Berkeley Law and joining the Center for Biological Diversity, Siegel was a natural history guide leading wilderness trips in Alaska. She now creates campaigns for protecting plants and animals threatened by global warming, and for reducing greenhouse gas pollution.

“Kassie has been a tireless advocate for polar bears and other species facing extinction from climate change,” said Kieran Suckling, the center’s executive director. “These animals have a much better chance at survival with her on their side. Under her leadership, the Climate Law Institute has become a law powerhouse, rapidly setting the legal framework for how our nation deals with global warming.”

In addition to her work on behalf of polar bears, Siegel filed similar petitions to protect 12 of the world’s penguin species in response to climate changes that caused food shortages and habitat loss.