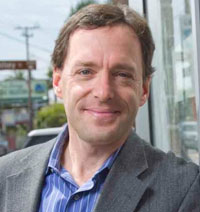 “In our 25 years, this is probably the most significant piece of legislation that we’ve had a direct hand in passing,” EBCLC Faculty Director Jeff Selbin said of the Fair Debt Buying Practices Act. “It will help all consumers in California, and we hope it becomes a model for other states around the country.”

The Act, which takes effect January 1, mandates that debt buyers substantiate the validity of a debt before trying to collect—and bars them from filing suit unless they can verify the debt and the amount. It also precludes lawsuits filed after the statute of limitations on collecting has expired.

EBCLC initiated the push for legislation to combat an alarming rise in debt buyers’ deceptive tactics, and remained heavily involved in its development, drafting, and promotion.

“EBCLC’s fingerprints are all over this bill,” said Berkeley Law adjunct professor and clinic adviser Ted Mermin ’96, executive director of the Public Good Law Center in Berkeley. “Over a three-year period, EBCLC was involved in negotiations; drafted many of the bill’s revisions; worked behind the scenes to garner support at conferences, online, and in the press; testified at many hearings; and eventually co-sponsored the bill with California Attorney General Kamala Harris.”

In 2010, a Federal Trade Commission (FTC) report concluded that the nation’s system for resolving disputes over consumer debts was “broken.” Noting that debt buyers used “robo-signers” who mass-produced affidavits falsely attesting that they had carefully reviewed debt records for their validity, the report urged states to ramp up measures to protect consumers and improve debt collection practices.

“Hundreds of thousands of these collection cases are filed in the California courts every year,” Mermin said. “A significant proportion of the cases most likely to be infected by inaccurate information and a lack of due process are brought by debt buyers. By definition, they have less ready access to the original account data and no ongoing relationship with the consumer, as opposed to the original creditor bank or retail store. The presence of this bill and the work of organizations like EBCLC to fight back on behalf of consumer victims has already had a salutary effect on the cases being filed now. They are less sloppy and more professional.”

When the FTC released its 2010 report, about half the people contacting EBCLC for legal help were seeking relief from erroneous debt collections. “Countless clients had been victims of abusive debt-collection practices,” said Megan Ryan, staff attorney for EBCLC’s Neighborhood Justice Clinic (NJC). “Due to these abuses, we’ve seen people lose their homes, lack the money to pay for basic necessities like groceries, and endure endless and unnecessary stress.” “We met with people who were illegally sued on debts past the statute of limitations, debts racked up by identity thieves, debts they had already paid, and debts by companies they had never heard of,” Terp said.

While drafting the legislation, Terp considered bills adopted by other states and those suggested by the FTC, reconciling them with existing substantive law and procedure in California. She also co-drafted a white paper that laid out the policy reasons and personal stories driving the push for reform. EBCLC brought in partners to help propel the effort forward, and Terp worked with Mermin to reshape the bill in early 2011.

State Senator Mark Leno signed on as the bill’s author, and fate intervened when fellow Senator Lou Correa discovered that his wages were being garnished by a third-party debt collector on a $4,000 debt owed by a debtor with the same last name. Correa promptly became a co-author—and later chair of the Senate Banking Committee.

The Senate and the Assembly Judiciary Committee approved the bill in 2012, but it was defeated in the Assembly Banking Committee. The legislation was reintroduced this year and, after some negotiations and slight revisions to allay certain concerns raised by the banking industry, passed the Senate and Assembly with no vote cast against it.

“This bill protects all California consumers, whether they’re low income or elected senators,” Terp said. “It ensures that third-party debt collectors go after the right people for the right amount. The bill was born at EBCLC and grew directly out of client need. EBCLC staff saw the big picture: what reform was needed, and what it would take to make that a reality.”