It was a remarkable time: Two of North America’s Supreme Court justices visited Berkeley Law in as many days, sharing their ideas about constitutionalism, free speech, and civil liberties.

On Sept. 9, U.S. Supreme Court Associate Justice Anthony Kennedy taught an afternoon class on federal courts and the constitution and delivered a lecture on The Role of the Supreme Court. The next day, the Hon. Justice Rosalie Silberman Abella of Canada’s Supreme Court addressed the law school community on Identity and Reversing Discrimination.

Justice Kennedy was appointed to the U.S. Supreme Court in 1988 by President Reagan after serving on the 9th Circuit Court of Appeals. He was the youngest federal appellate court judge and the third youngest in the country’s history. In his 26 years on the high court, Kennedy has gained a reputation as a fierce defender of free speech and is often the swing vote on split decisions.

Justice Abella was appointed to Canada’s Supreme Court in 2004 after serving 12 years on the Ontario Court of Appeal. She is known for helping to reduce employment barriers faced by women, aboriginal peoples, minority groups, and the disabled. Abella is the first Jewish woman judge and also the youngest appointed to the judiciary in Canadian history.

Beyond their early and noteworthy achievements, these pre-eminent jurists also share a love of literature. Each sprinkled their talks with lessons learned from great works, be it Shakespeare’s King Lear or Ralph Ellisons’s Invisible Man.

But their childhood influences are starkly different: Kennedy was born in suburban Sacramento and took over his father’s law practice before being called to the bench. Abella was born in a displaced person’s camp at the end of World War II, the daughter of Holocaust survivors. She and her parents immigrated to Canada as refugees.

In their lectures, informal conversations with faculty, and student interactions, the pair shared their thoughts on some of the major legal issues of our times and left us to imagine a world of possibilities.

Kennedy delighted students by teaching a combined session on Federal Courts and Constitutional Law—courses normally taught by faculty members Amanda Tyler and Fred Smith. Tyler called it a “privilege” to have Kennedy engage her students about the role of the federal courts “as envisioned by our country’s founders.” Professor Melissa Murray, whose Regulating Sex and Sexuality students filled the remaining seats, said it was “a wonderful moment to see the architect of the court’s jurisprudence on gay rights in action.”

Kennedy focused on fundamentals: He discussed the structure of government and its key components.  He described the importance of—and difference between—separation of powers and checks and balances and used the metaphor of a pendulum to describe the relationship between the two.

He also expressed concern about the growing role of the Supreme Court, and questioned its place in deciding charged social issues better left to Congress—such as health care, immigration, and same-sex marriage.

“Is it a working democracy when the Supreme Court justices, typically a majority of five, make decisions that affect the lives, values, and destiny of our people? What’s going on here?” he asked.

Kennedy advised students to read the U.S. Constitution again and again—as he does, finding new insights each time. He also referenced the Magna Carta, “one of the seminal documents in the history of the human race” where “people gave the law to the King, not the other way around,” he said. “This is huge. This is the whole concept of Anglo-American law.”

A heritage of freedom 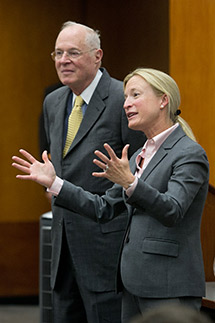 In class and during his lecture at the First Congregational Church in Berkeley, Kennedy cited one of the Court’s more controversial rulings that became “majoritarian over time”: the flag burning case of Texas v. Johnson. Eighty U.S. senators initially criticized the court’s decision, he said. The justice, who voted with the 5-4 majority in the case, quoted his concurrence:

“It is poignant but fundamental that the flag protects those who hold it in contempt.”

Such cases teach students about the human experience, Kennedy said. “Each case is a story of our moral life; of our dreams and expectations, of evil and betrayal.” Another teaching tool, the use of skepticism, was best kept in the classroom, he advised, because it leads to cynicism and “corrosive human values.”

The justice encouraged a new generation of leaders to “embrace our heritage of freedom,” insisting that “you cannot defend or protect what you do not know…. As a people, we have a mission to show that freedom is essential to the definition of humanity.”

In closing, he challenged aspiring lawyers to abide by the covenant of their profession:

“Law is a promise; it is a hope and an expectation, and it is part of your law school training to help us fulfill that.”

Justice Abella spoke passionately about identity, pluralism, and justice during her law school lecture. She captured the ideals of multiculturalism, by asking, “Aren’t we all diminished by what we don’t know about others, and what others don’t know about us?”

In North America, a “shared longing to belong” drove the movement for integration, for a social unity based on respect for differences and identity, Abella said. Yet the United States and Canada diverged in a key respect, she argued: In the U.S., to be equal is to have the same right as every other American—“There’s no difference … Individualism promotes assimilation.” But In Canada, the right to integrate based on differences has as much legal and political integrity as the right to assimilate, she said. The individualism at the core of the U.S. Constitution ascribing civil, legal, and political rights to every person regardless of differences became “America’s most significant international export in the Western world,” Abella noted. Concern for the “rights of the individual monopolized the attention of the pursuers of justice”—until the carnage of World War II.

The world was “left with no moral alternative but to acknowledge that individuals could be denied rights … because of their differences,” Abella said. She underscored the importance of protecting the rights of a group and argued: “It’s not reverse discrimination, it’s reversing discrimination.”

Abella’s deep commitment to human rights rose from the ashes of the Holocaust. After Nazi Germany invaded Poland, her parents were forced into concentration camps. Their first child died at Treblinka; nearly one million others were killed in the camp’s gas chambers. In 1950, just shy of Abella’s fourth birthday, the family immigrated to Canada.

The “horrifying spectacle” of the Holocaust taught Abella three profound lessons: 1) indifference is injustice’s incubator; 2) it’s not just what you stand for, it’s what you stand up for; and, 3) we must never forget what the world looks like to those who are vulnerable.

But the global institutions that were created to prevent genocide after World War II “failed miserably,” Abella said. As evidence, she cited the massacres in Rwanda, the mass murders in Bosnia, the “disgraceful chapter” in the world’s glacial policy in Darfur, and more. Abella accused these institutions—including the United Nations—of “playing fast and loose with their legitimacy and integrity.” The international human rights community needs to rethink its endless “tolerance of intolerance,” or declare moral bankruptcy and close up shop, she charged.

In Abella’s view, “we are at a justice crossroads” confronting policy challenges in education, the environment, healthcare and the economy. She cautioned that “the moral choices we make will determine how history judges us and what kind of world we are going to have.”