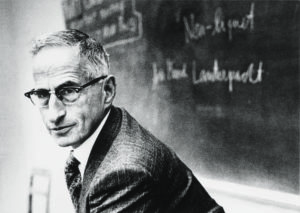 The Stefan A. Riesenfeld Memorial Award

Each year, BJIL presents the keynote speaker with the Stefan A. Riesenfeld Memorial Award, traditionally given to a distinguished scholar or practitioner who has made outstanding contributions to the field of international law. The purpose of the award is to honor the memory of Professor Riesenfeld, who devoted much of his life and career to the study and practice of international law, and to recognize a recipient who has demonstrated a commitment to the values and ideas that Professor Riesenfeld espoused and advocated.

Professor Riesenfeld himself escaped Nazi Germany in 1934 at the age of twenty-six and came to Berkeley Law to work as a researcher of comparative law for the then-Dean Edwin Dickinson. Speaking little English on his arrival, he nevertheless managed to graduate from Berkeley Law in 1937 with distinction, and to earn a J.S.D from Harvard in 1940. Professor Riesenfeld began his academic career at the University of Minnesota, simultaneously teaching law and earning an undergraduate degree in engineering, but he soon voluntarily enlisted in the U.S. Navy during World War II, and he served as an LST commander in the South Pacific, returning to his teaching post in Minnesota in 1946.

In 1952, Professor Riesenfeld joined the Berkeley Law faculty, where he remained until 1976 when school regulations required him to retire. Nevertheless, Professor Riesenfeld received continuous annual re-appointments at the Law School until his death on February 17, 1999 at the age of ninety. During his academic career, he wrote numerous books and articles on a wide range of international law topics, including maritime law, trade and development law, the European Economic Community, treaty law, and labor law. He also served as Counselor for Public International Law at the U.S. Department of State, and was twice engaged to argue major cases before the International Court of Justice in the Hague. Professor Riesenfeld’s public interests ranged from reform proposals of the German Civil Code during the Weimar Republic, through participation in the drafting of Germany’s Basic Law during the allied occupation, to the United States Bankruptcy Commission’s second reform effort.