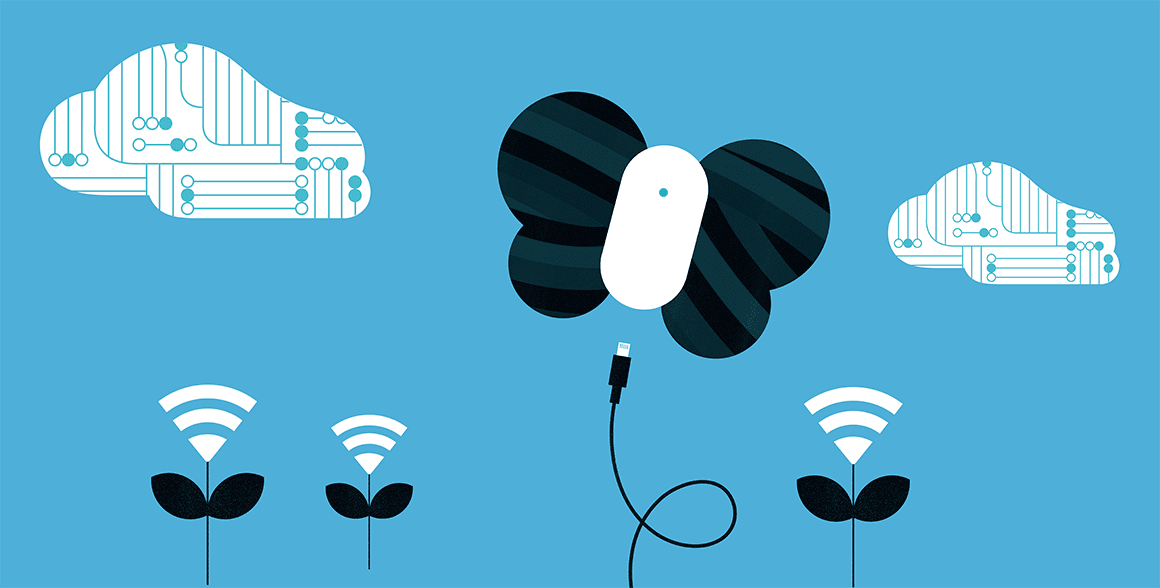 As the digital world expands and COVID-19 shows how technology is a lifeline, Berkeley Law continues to lead in helping our legal and policy spheres keep pace.

When Professor Peter Menell first got the idea for the Berkeley Center for Law & Technology in the early 1990s, telephones plugged into hard-wired wall jacks, compact discs stacked up in dens, and Netscape’s Navigator web browser was still several years away.

“Tech law” simply meant intellectual property. Battles over software for microcomputers were just starting to make headlines. Berkeley Law did not yet have email, and the dot-com bubble that flooded Silicon Valley with cash hadn’t begun to inflate.

In 2020, the digital world’s tentacles reach into nearly every aspect of our everyday lives. The ways we communicate, bank, shop, listen, and watch have been transformed. Intellectual property remains a mainstay of tech law, but the digital revolution has shifted how we think—and worry—about many other law and policy areas, from privacy and security to evidence and social justice.

Through all the sweeping changes and shifting paradigms, BCLT—now marking its 25th anniversary—has led the way with innovative approaches to vexing challenges. The first of its kind, the center deftly confronts and often anticipates the next wave of legal and policy challenges, and analyzes solutions.

With an abundance of strategically orchestrated courses, events, scholarship, and policy and judicial engagement, its multidisciplinary approach reaches far beyond Berkeley Law. That success has clearly resonated: The school has been ranked No. 1 for intellectual property law among U.S. law schools in 17 of the past 19 years.

“I’d like to say I had unusual foresight, but when you look back, it was a pretty logical idea,” Menell says. “I was a computer person, I saw the world through computers and realized this was something we all would do. That was the time and this was the place to do it.”

First, and out front

The early days were lean. Menell helped lure Professor Robert Merges to Berkeley Law, and they cobbled together funding with the help of Ray Ocampo ’76, then a top executive at Oracle who later served as BCLT’s first executive director.

The center now has 17 faculty co-directors and a dynamic crop of more than 30 adjunct instructors who come from all over the tech-law sector.

The hub of a stellar array of activities and organizations, BCLT supports the Berkeley Technology Law Journal (BTLJ), the Berkeley Journal of Entertainment & Sports Law, and myriad student groups ranging from patent and biotech law to public health and space law.

The center integrates students into all aspects of its programs, scholarship, and public policy work. In 1997, Menell joined forces with BTLJ to establish the Annual Review of Law & Technology, which has published over 600 student-authored articles.

This spring’s blockbuster Google v. Oracle case at the U.S. Supreme Court drew two separate briefs from BCLT-affiliated faculty, one by Menell and another by Samuelson and Catherine Crump, director of the school’s Samuelson Law, Technology & Public Policy Clinic. The clinic’s students contributed research to the brief.

The center offers a Law & Technology Certificate for J.D. and LL.M. candidates and hosts a slew of events, including an annual symposium published by BTLJ and yearly programs focused on privacy, digital media, and patent law.

For students, BCLT organizes four career fairs and twice weekly gatherings that bring top practitioners from all corners of the legal arena to campus. “We try to introduce our students to all the different ways there are to be a lawyer,” says BCLT Executive Director Jim Dempsey. “Even if you only go to half of our lunches over three years of law school, that’s 75 different ways to be a lawyer, 75 different role models.”

Students can also get hands-on experience through the Samuelson Clinic, which works closely with the center. The clinic attracts a mix of students—some start out planning careers in a core tech-related field like intellectual property law, while others are more focused on criminal justice or immigration but curious about the way technology is reshaping law more generally.

Across the board, Crump notes, working with the clinic shifts their perspective on pivotal questions facing lawyers, judges, policymakers, and citizens as we all navigate this new digital terrain. “In a world increasingly run by data,” she says, “everyone has to have an understanding of what’s going on, no matter what their chosen field.”

Adapting to a shifting landscape

Looking back on BCLT’s quarter-century, Menell notes that some of tech law’s core topics haven’t changed. But the sector has exploded with new angles, prompting the center to expand its breadth and reach to match.

“The question of how copyright and patent law protect software is one of the most significant issues, and that’s been a theme throughout BCLT’s history,” he says. “But we’re no longer a center that’s just focused on intellectual property.”

Over the past 15 years, Berkeley Law has added classes that reflect the ever-widening sector, covering everything from space to wine to reproductive technologies. The school has recruited highly regarded faculty members to address the expanded frontier of issues, including Paul Schwartz, a leading privacy law expert and co-author of the field’s leading casebook, and Chris Hoofnagle, an expert on international privacy law and enforcement.

Professor and former public defender Andrea Roth examines how criminal evidence and procedure rules should be reshaped in the era of science-based prosecutions; Professor Kenneth Bamberger is deeply engaged in questions of consumer privacy and how policymakers can protect it. He works closely with BCLT Co-Director Deirdre Mulligan, associate dean and head of school at UC Berkeley’s School of Information.

Catherine Fisk has extended her labor law work into the realm of video game creators, who don’t have the same union protections as their screenwriting counterparts. Tejas Narechania focuses on telecommunications and patent law, and Sonia Katyal’s wide-ranging work includes addressing the social justice implications of artificial intelligence.

These are just a few examples of Berkeley’s pathbreaking scholars in the field.

“We built a center that was really about the frontier of law and technology, and we’re always thinking about how to stay ahead of the curve,” Menell says. “That, in many ways, parallels what Silicon Valley is doing. It’s not like you can get to a successful point and then just sit back.”

Along the way, BCLT has become a major educator for another sector: the federal judiciary. In 1998, Menell began an IP boot camp in conjunction with the Federal Judicial Center that has reached over 850 federal judges. This led to development of the Patent Case Management Judicial Guide, now in its third edition.

Building on that experience, Berkeley Law established the Berkeley Judicial Institute in 2018 to further bridge the gap between the judiciary and the legal academy. Jeremy Fogel, a former judge who led the Federal Judicial Center for seven years, became its first executive director.

At BCLT’s recent 25th anniversary gala, Fogel called the education provided by center leaders invaluable for jurists who come to the bench with little to no understanding of patent law. “

And they don’t just do it,” he said. “They do it with an extraordinary level of quality.”

The ongoing challenge is keeping up with the dizzying pace of innovation and seeing new wrinkles as they develop.

For example, while many copyright and patent questions now being debated haven’t changed much in 25 years, Samuelson explains that the way information can be readily manipulated—from the opaque algorithms behind targeted online advertising to “deepfake” videos that look real but are actually an artificial intelligence-aided scam—is new.

BCLT’s proximity to Silicon Valley gives faculty and students a front-row seat to what’s happening in the tech industry, and a vantage point to watch it unfold with a critical eye.

“The Bay Area continues to have an outsized role in the digital revolution, and I think part of our role here is to study what’s happening and try to improve the law,” Menell says. “We’re again entering a period where the big tech companies are dominating in ways that are raising questions.”

He foresees BCLT “training lawyers for careers at the cutting edge of law and technology, educating judges about managing and resolving technology cases, and supporting the larger public interest. That’s very important to what professors here, and the institution itself, care about.”

Andrew Gass ’08 says he didn’t think about the idea of technology having a moral valence until he came to Berkeley Law. Now a partner in the San Francisco office of Latham & Watkins, he often represents tech companies and chairs the American Bar Association’s IP Section Committee on Copyright and New Technologies.

“Berkeley gave me the tools to do it,” says Gass, who has taught Copyright Law and an advanced seminar on Copyright, Competition & Technology at his alma mater.

Daralyn Durie ’92, a founding partner at the San Francisco firm Durie Tangri, says BCLT and Berkeley Law’s “amazing” students have been incredibly valuable to her firm. But the benefits go even further, she says, with BCLT having “created a sense of community.”

As technology becomes more intertwined with the criminal justice and immigration systems, Crump says, the Samuelson Clinic’s work has expanded to bridge many fields.

In the ’90s, copyright was king; after the 9/11 terrorist attacks, the surveillance state topped the list of concerns. These days, it’s questions about how law enforcement agencies are using doorbell camera footage and the extent to which surveillance data is being shared with ICE.

“Twenty years ago, we had to fight to get people to recognize that technology law is a public interest field,” Crump says. “We’ve won that argument now. The common core of our clinic is trying to help students understand how to regulate technology in the face of rapid change, and figure out who should do it.”

Current clinic students just got a firsthand look at the process after they wrote and presented a set of privacy principles to the Oakland City Council. Drafted by Nomi Conway ’20, Amisha Gandhi ’20, and Courtney Reed ’20, the guidelines passed unanimously.

They provide direction for city staffers to make decisions any time they consider new programs that would collect or use residents’ personal information, such as installing surveillance equipment, collecting data on students who miss school, using automated license-plate readers to log parking violations, or gathering personal information about library patrons. The Alameda City Council passed a similar package based on the students’ work.

BCLT has also emerged as a leading voice on another pressing issue in the tech sector: diversity. Dempsey says the weekly events with practitioners provide a great place for first generation students to envision themselves in the industry, and to see the many kinds of opportunities in the field.

He describes a “virtuous circle,” in which Berkeley Law students go to work for Silicon Valley firms, then come back to campus to recruit, teach, and mentor students coming up after them. That cycle creates networking opportunities, of course, and helps expand the pool of students in the tech law pipeline.

Just like the digital revolution, BCLT has evolved and grown stronger in the past 25 years—making the future even more exciting.

“At this point we’re no longer just a startup,” Menell says. “We’re mature, but very dynamic.”