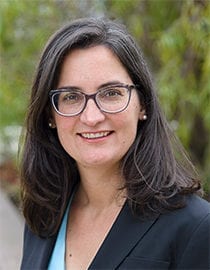 Catherine Crump is director of the Samuelson Law, Technology & Public Policy Clinic at UC Berkeley School of Law, as well as Clinical Professor of Law. Crump’s civil liberties advocacy focuses on protecting privacy and free speech in an era of increasingly ubiquitous surveillance. She also focuses on ensuring that new technologies are integrated into the criminal legal system with attention to equity and accuracy.

Under Crump’s leadership, the Samuelson Clinic has litigated cases to force disclosure of records regarding the Trump Administration’s use of social media information to remove or exclude people from the United States based on their expression or beliefs; to improve public access to court records about the government’s use of electronic surveillance; and to push back against court orders requiring websites to remove content. She has also authored or co-authored reports on the use of electronic monitoring technology on youth in the juvenile system; why courts should impose consequences when police officers fail to activate their body-worn cameras and then want to testify about unrecorded events; and on a Federal Bureau of Prisons policy of monitoring emails that incarcerated persons send to their attorneys. Crump has testified before Congress, the European Parliament, and various state legislatures and municipal bodies on issues including cell phone location tracking and the impact of national security surveillance on people outside the United States.

Crump appears regularly in the national news media as an expert commentator as well as opinion writer, in outlets such as The Washington Post, The Los Angeles Times and CNN. Her TED talk on the civil liberties problems with automatic license plate readers has been viewed some 2 million times.

Crump’s scholarly agenda addresses regulation of surveillance technology, particularly by state and local government. Her piece Surveillance Policy Making By Procurement documented the ways in which federal grants for surveillance technology subvert local democratic control of policing. Another article, Tracking the Trackers, focused on the use of location tracking bracelets on youth going through the juvenile system. It demonstrated the ubiquitous nature of this technology and documented its net-widening effect.

Prior to joining the Berkeley Law faculty, Crump spent nearly nine years as an attorney at the American Civil Liberties Union, where she litigated First and Fourth Amendment challenges to national security-related policies as well as police surveillance. She filed and argued some of the first civil lawsuits against the government’s policy of conducting suspicionless searches of electronic devices at the international border, argued before the en banc Third Circuit in a case challenging the government’s warrantless use of a GPS tracker on a vehicle, and was counsel in a landmark free speech case challenging the Child Online Protection Act. She also authored two influential reports, You Are Being Tracked: How License Plate Readers Are Being Used to Record Americans’ Movements and (with co-author Jay Stanley) Protecting Privacy from Aerial Surveillance: Recommendations for Government Use of Drone Aircraft.

Crump is a graduate of Stanford University and Stanford Law School. In 2014 the law school awarded her the Miles L. Rubin Public Interest Award, given annually to one graduate who has made an outstanding contribution to the public interest. She clerked for Judge M. Margaret McKeown of the United States Court of Appeals for the Ninth Circuit.