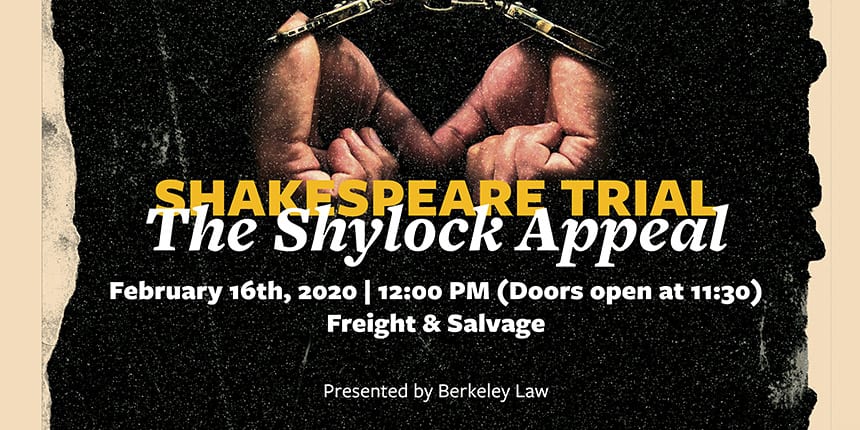 To convict or not to convict. That is the question facing the jury—aka audience members at a unique performance of The Shylock Appeal.

Centuries after William Shakespeare penned one of the most controversial verdicts in literary history in The Merchant of Venice, Shylock will get a second chance Feb. 16 in Berkeley.

In the play, Shylock (a Jewish moneylender) takes Antonio to court for failing to meet the terms of their loan and demands the pound of flesh promised to him in their contract. The court rules against Shylock, holding that he was owed no additional payment from Antonio, nor even the return of his principal—and that he also must lose control of his remaining assets and be forced to convert to Christianity.

Part theater and part mock trial, the production stars Berkeley Law Dean Erwin Chemerinsky, UC Irvine Law Dean L. Song Richardson, and four actors from the New Swan Shakespeare Festival at UC Irvine. Tickets are still available for the noon show, which got rave reviews from a sold-out crowd last year in Irvine, and Chemerinsky is happy to bring it to the Bay Area.

“It’s great fun to do, and raises questions that still resonate all these centuries later,” he says.

At the performance, Shylock appeals the ruling against him. Chemerinsky will argue that Shylock’s contract with Antonio was invalid, and that the initial ruling should be upheld. UC Irvine Law Dean Song Richardson will argue on Shylock’s behalf.

After they make their case before United States District Court Judge Andrew Guilford, audience members will turn in a card with their verdict—to either affirm the judgment against Shylock or reverse it.

“Some scholars see The Merchant of Venice as an anti-Semitic play and others believe Shakespeare was highlighting the dangers of such discrimination,” says Chemerinsky, noting that Venice established the first Jewish ghetto in 1516 and that England had banished Jews in 1290 through King Edward I’s Edict of Expulsion. “However people view that question, the play touches on important issues that continue to be relevant.”

While the trial is set in Venice, Shakespeare’s audience in his native England likely assessed the legal machinations through their own laws. While a modern-day American production that shifts Roman law procedure to an English common process requires “all sorts of adjustments and anachronisms,” says Berkeley Law Professor, legal historian, and English law expert David Lieberman, it’s part of the creative fun.

Shylock’s loan to Antonio takes the form of a penal bond, well known in English law because of its procedural advantages over other forms of debt. Lieberman explains that aside from the specified provision of what the debtor owes in case of default, penal bonds are designed to favor creditors and to rule any consideration of the reasons for the loan, the intention of the parties, and the nature of the undertaking.

“The trial in Act 4 of The Merchant of Venice largely conforms to this model,” says Lieberman, president of the Pacific Coast Conference on British Studies and winner of Berkeley Law’s 2019 Faculty Lifetime Achievement Award. “No one challenges the legal validity of the bond document. Antonio acknowledges it, and Shylock to his downfall keeps rejecting any other considerations, such as mercy, in saying repeatedly that he stands by his bond and what he is owed.”

The legal analysis turns on the penalty, not the contractual agreement, Lieberman explains. While penal bonds were originally handled by the Court of Common Pleas, the Court of Chancery was claiming jurisdiction by Shakespeare’s time—and increasingly granting relief against penalties that well exceeded the loan’s value, which were typically specified in such bonds.

The eventual doctrine and most important legacy of this jurisprudence for Anglo-American law, Lieberman says, is the idea that the penalty should be limited to the actual damages to the creditor caused by the debtor’s breach, rather than the penalty specified in the bond.

“Shylock’s complete undoing is secured by another legal argument concerning the penalty,” he says. “If he takes the flesh, he’ll violate the law of Venice against threatening the life of a Christian. This situation would also be relevant in England. If he tries to collect, he’d be guilty of a felony—likely some version of attempted murder. Bottom line, the action in the case concerns the penalty, not the contract itself, as Shakespeare recognizes.”