Capping a busy day of Alumni Weekend festivities, members of the Berkeley Law community gathered October 2nd for a ribbon-cutting ceremony that unveiled the law school’s sparkling new patio as the I. Michael Heyman Terrace.

Dean Edley spoke at the event along with Roy Eisenhardt ’65 and Roderic Park, co-chairs of the I. Michael Heyman Project, which was launched to honor Heyman’s distinguished record of service to the University of California, the San Francisco Bay Area, and the nation. The project was designed to fund the I. Michael Heyman Chair to support the work of a distinguished scholar, and to name the patio in his honor.

A prominent part of Berkeley Law’s ongoing physical expansion and upgrades, the Heyman Terrace provides a welcoming face to the southeast corner of campus, an ideal gathering place for students and faculty, and a natural location for law school receptions and events.

Edley called it a fitting tribute to Heyman, given his half-century of service to both Berkeley Law and UC Berkeley as a whole. “In many ways it represents a connection between the law school and the campus,” said Edley. “And that makes perfect sense when you talk about Mike Heyman.”

Heyman joined Berkeley Law’s faculty in 1959 after clerking for U.S. Supreme Court Chief Justice Earl Warren ’14, and also joined the Department of City and Regional Planning in 1966. Appointed vice chancellor of UC Berkeley in 1974, Heyman became chancellor in 1980 and served for 10 years—the longest term of any chancellor in school history. 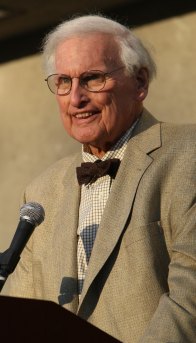 Park, vice chancellor under Heyman from 1980 to 1990, described his transformative effect. “I can think of no one who has generated more enduring positive changes for this campus than Michael Heyman,” said Park. “He envisioned Berkeley as second to none and open to all.”

Specifically, Park pointed to three areas of achievement: leading a dramatic increase in diversity, from 21 percent students of color in 1980 to 57 percent in 1990; anticipating the decline in state support and launching a fundraising campaign that tripled private giving and increased the number of endowed chairs from 36 to 118; and reorganizing the campus’ biological sciences structure.

“He presided over the largest academic reorganization in North America,” Park said of Heyman’s work in reconfiguring 14 individual departments into three new ones while encouraging research in newly emerging biotechnology fields and completing or beginning four biosciences buildings.

Eisenhardt took Heyman’s property class as a first-year law student, which began an enduring friendship. “(Heyman) took us from thinking the law was rules and arguments and guided us much deeper into the subtleties,” Eisenhardt said. “He had an unusual capacity for holding us to a higher intellectual level while ensuring that we were having fun at the same time.”

A former Marine Corps officer, Heyman was instrumental in developing land management plans for treasured places in California, Hawaii, and the U.S. Virgin Islands. His work led to a methodology for land-use planning in fragile ecosystems that has been widely replicated.

Counselor to the deputy assistant secretary for policy at the U.S. Department of the Interior, Heyman also played a key role in establishing the Presidio Trust—helping to create a mission, governing structure, and business plan for San Francisco’s Presidio after the U.S. Navy vacated it in 1994.

From 1994 to 1999 he was secretary of the Smithsonian Institution, which includes 16 public museums and galleries, the National Zoo, and numerous research facilities. “Sort of a strange title,” said Edley, “but it means he was the man.”

Heyman recalled “many fond memories” of the terrace location—in particular his noontime matches on the tennis courts that used to be nearby. He also drew a connection between joining Berkeley Law amid a wave of new hires to its current growth. “The same infusion of talented young faculty has occurred under Chris Edley,” Heyman said, “and I am awed by their abilities.”

Watch video of the dedication here: