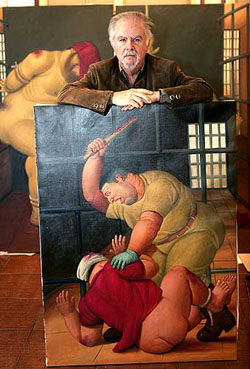 The paintings project graphic images of abuse and humiliation at the hands of American personnel. The setting is unmistakable, the subject instantly recognizable. The pictures are the work of renowned Colombian painter Fernando Botero, whose horror over news accounts of prisoner abuse inside Iraq’s Abu Ghraib prison inspired the dramatic series of oils and sketches. While portions of the collection have traveled to prestigious venues in Europe, and have been shown at a gallery in New York, no museum in this country has yet offered to stage the exhibit.

Now, thanks to the efforts of UC Berkeley’s Center for Latin American Studies [CLAS]—with financial support from Boalt Hall—these moving and provocative paintings, each simply titled “Abu Ghraib” and numbered sequentially, are coming to the Berkeley campus. Botero will open the exhibit on Jan. 29, and the presentation will continue through March 25, 2007 in the reading room of the Doe Library.

The 47 oils paintings and sketches are part of a larger collection of 170 pieces that has been exhibited in Italy, Germany and Greece. The works, which portray vivid scenes of physical and mental abuse inflicted on Iraqi captives, belong to Botero’s private collection and are not for sale.

In reviewing the exhibit at the Marlborough Gallery in New York last fall, The New York Times said the images “do something the harrowing photographs of the naked, blindfolded and tormented prisoners do not: they restore their dignity and humanity without diminishing their agony or the absolute injustice of their situation.”

Botero, 73, was born in Medellin, Colombia and moved to Bogota where he held his first show. Today, Botero’s work can be found in 46 museums around the world including the Guggenheim Museum and Metropolitan Museum of Art in New York, the Hirshhorn Museum in Washington, D. C., the Hermitage in St. Petersburg, Russia, and the Israel Museum in Jerusalem.