As his international peers artfully discussed tricky climate change topics at a recent competition in Copenhagen, Ian Fein ’11 had an epiphany: “It struck me that some of these law students will eventually be political leaders negotiating the same issues on a bigger stage.”

Students on eight law-school teams—from Berkeley Law, NYU, India, South Africa, Chile, Singapore, Denmark, and Australia—were invited to the Copenhagen Competition, a run-up event to the next UN Conference on Climate Change in December. The University of Copenhagen hosted the event to give law students from around the world a chance to negotiate the Copenhagen Protocol before the real negotiations take place.

For three days, before European environmental law professors acting as judges, the four-person teams negotiated how to reduce greenhouse gas emissions on behalf of fictitious industrialized or developing nations roughly equivalent to those from their own region. 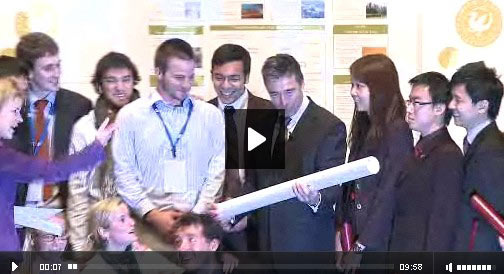 Berkeley Law’s group—Fein and 2Ls Tyler McNish, Heather Matsumoto, and Jeslyn Miller—represented Calitopia, a hybrid of sorts between California and the general United States. A few months earlier, they were selected from a group of 45 Berkeley Law students who completed a moot court-style audition and an environmental Q&A session with team coach Cymie Payne ’97.

“It’s a massively complex field that involves international law, economics, science, and business,” says Payne, associate director of the Center for Law, Energy, and the Environment. “Students don’t have much substantive experience in this area, so we looked for people who could bring different experiences and expertise to the table.”

Fein had covered environmental issues as a journalist, McNish possessed in-depth knowledge of cleantech and an advanced degree in Economics, and Matsumoto worked for the United Nations and in different cultures. Payne credits Miller—who fared well in past moot court competitions and brought a strong grasp of international environmental treaties—for playing a key role in organizing the team’s written proposal and sharpening its negotiation skills.

The competition focused on the Clean Development Mechanism (CDM), an arrangement created under the 1997 Kyoto Protocol, which expires in three years. The CDM allows industrialized countries that have committed to reducing greenhouse gases to instead invest in projects that lower emissions in developing countries.

“The broader issue was which developing countries would have to join an emissions reduction program,” Payne says. “When would they take this on, and how could they ensure environmental integrity while still advancing sustainable economies?”

To prepare for the competition, Berkeley Law’s team met with expert negotiators in the field, ran through a series of hypothetical scenarios, anticipated questions, and prepared opening statements. The competition was conducted entirely in English—even though half the teams didn’t speak it as their first language.

“That was amazing,” says Fein, who negotiated with teams from India, Chile, and Denmark. “As a former English major, I was in awe at how eloquent some of these second-language speakers were. They truly sounded like dignitaries.”

Shortly before the competition, Payne spoke in Aarhus, Denmark at a university conference entitled, “Beyond Kyoto: Addressing the Challenges of Climate Change.” After the competition, her team attended the International Scientific Congress on Climate Change—with more than 2,500 delegates from nearly 80 countries.

For the students, transitioning from mock negotiations to hearing top scientists analyze critical issues was both scary and inspiring. “Most Americans think of climate change as an environmental issue first and an economic issue second,” Fein says, “but the scientists showed how this really is a human rights issue. The people most affected are those least responsible for the problem.”

The law students also got to meet with Danish Prime Minister Anders Fogh Rasmussen and some of the world’s most prominent climate change experts. Impressed with the teams’ written proposals, competition organizers had them published for distribution at the upcoming UN Conference on Climate Change.

“As exciting and rewarding as the competition was,” says Fein, “the highlight was spending time with fellow law students from every continent except Antarctica who shared a passion about the environment and international law. Over a short period of time, we developed some really strong friendships.”