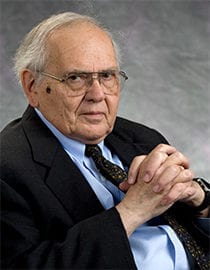 After graduating from law school, Melvin Eisenberg was with the New York firm of Kaye Scholer Fierman Hays & Handler. He also served as assistant counsel to the President’s commission on the assassination of President Kennedy (Warren Commission) and as assistant corporations counsel of New York City. He joined the Berkeley Law faculty in 1966.

Eisenberg is the author of The Nature of the Common Law (1991) and The Structure of the Corporation (1997) and has published casebooks on the subjects of contracts and corporations. He held the American Law Institute’s Justice R. Ammi Cutter Chair from 1991 to 1993. He has been a visiting professor at Harvard University, a Guggenheim fellow and a Fulbright senior scholar. He was chief reporter for the American Law Institute’s Principles of Corporate Governance. He is presently a fellow of the American Academy of Arts and Sciences. Since 1998, he has been the Justin W. D’Atri Professor of Law, Business and Society at Columbia. Eisenberg is also an adviser to the Restatement (Third) of Agency and Restatement (Third) of Restitution. He is presently a consultant to the ABA’s Committee on Corporate Laws.

In 1984 Eisenberg delivered the Cooley Lectures at the University of Michigan. He has also given lectures at a number of universities in the United States, Germany, Italy, England, Canada, Australia, New Zealand and Japan. He was awarded the UC Berkeley Distinguished Teaching Award in 1990. In 1998 the University of Milan conferred upon him the honorary degree of Doctor of Laws.