At a time when stark lines are drawn around political and moral questions, the scholarship and judicial opinions of the late Judge John T. Noonan Jr. defy categorization. An enlightened reader of our legal traditions’ fundamental texts, Judge Noonan could not understand why scholars might ask abstractly, “What is Law? How can that question be answered,” he inquired, “without asking another—‘Why do you want to know?’” For him, “The definition of law depends on the purpose of the definer.” That is, he believed that “the person precedes analysis.”

At the recent symposium, “Judge & Scholar: Perspectives on the Intellectual Legacy of John T. Noonan,” a distinguished group of international scholars, attorneys, and judges probed the lasting influence of the judge’s lifetime of work. Co-organizer Peter Stern said the event aimed “to bring together strands of Judge Noonan’s rich contributions to law, history, ethics, and religion. Judge Noonan was known and respected for the force of his intellect and the depth of his humanity.” The symposium was sponsored by the Robbins Collection and Research Center in Civil and Religious Law over two days at Berkeley Law in September 2019.

Before being nominated to the U.S. Court of Appeals for the Ninth Circuit by President Ronald Reagan in 1985, Judge Noonan was a professor at Berkeley Law for nearly 20 years. He wrote numerous books on canon law and Catholic theology, and on a range of topics including abortion, bribery, usury, contraception, divorce, euthanasia, family law, legal ethics, religious freedom, Shakespeare, slavery, and the development of moral theology. He is perhaps best known for his 1975 book Persons and Masks of the Law, which argued for a people-centered vision of the law rather than one that focused purely on rules.

As a judge, Noonan maintained a fierce independence and often ruled in favor of immigrants and refugees and against the death penalty, underscoring his wish to focus on the humanity of people affected by the rules in addition to the rules themselves. Americans, he wrote, share the “English common law tradition of judge-made law, [and thus] are blessed with a much fuller literature on their judges’ lives, reflecting, I believe, an American appreciation of the truth that the law a judge makes is a projection of values that are inescapably persona—even while the judge labors to be impartial.” 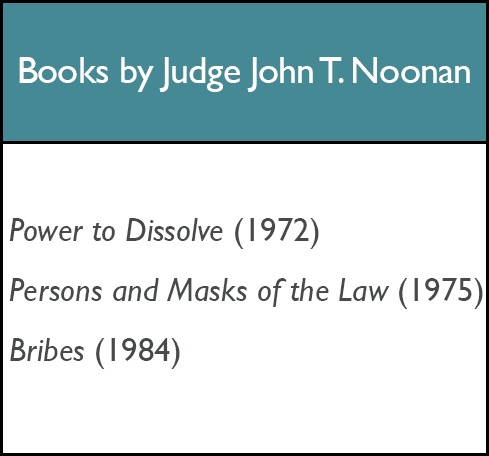 Opening the first session “Law and the Person,” the Honorable Diarmuid O’Scannlain, who served alongside Judge Noonan on the Ninth Circuit Court for over 30 years, noted that “Judge Noonan cared most about people” whether “in his scholarship, in his approach to law, or in his life.” University of St. Thomas Law Professor  Julie Oseid, who clerked Judge Noonan, detailed his careful language empathetic approach. She explained, “Judge Noonan’s capacity for empathy as a judge extended beyond his ability to step into the shoes of someone whose life was very different from his own. He was able to write about that person’s experience with the law so you, as the reader, also feel empathy for the person too.”

Judge Noonan’s deep concern for immigrants’ rights inspired his former clerk Richard Church, now a partner at K&L Gates, to apply his expertise in health care law to the issue of medical care for undocumented immigrants. Church  argued that “healthcare is much like law, in that it is easy to view it as a monolithic system. But like Judge Noonan, it’s important to acknowledge and empathize with people who walk through the doors of a court or a hospital.” Church shared findings from his research, co-authored by K&L colleagues Leah D’Aurora Richardson and Kenneth Kennedy, assessing how five states with high undocumented immigrant populations look at health care coverage for them and the benefits of providing them Medicaid or other coverage.

A session on “Law and Judging” was moderated by another former Noonan colleague, both at the Ninth Circuit and the Berkeley Law faculty, the Honorable William Fletcher. What stood out to Judge Fletcher was how Noonan’s “strong sense of justice went beyond categorization.”

University of Washington Law Professor Mary Fan, who also clerked for Noonan, probed how his person-centered vision was put into practice. She focused on two landmark cases, Lazo-Majano v. INS and U.S. v. Arizona, which both continue to be heavily cited. Lazo-Majano v. INS was one of Judge Noonan’s most important decisions, cited thousands of times in briefs and laying the groundwork for a new understanding of gender in asylum law. Olimpia Lazo-Majano had fled El Salvador in 1981 after being abused and tortured by an army sergeant. Her application for asylum was denied on the grounds that she would not face persecution if she returned to El Salvador. Judge Noonan disagreed, overturning the decision and writing, “persecution is stamped on every page of this record.” In U.S. v. Arizona, also an immigration ruling, he wrote about how SB1070. That Arizona law required local police to determine an individual’s immigration status, was deliberately creating a culture of fear in Arizona, as any interaction with police would be fraught with immigration implications.

Duke Law Professor H. Jefferson Powell spoke about the fascinating Fourth Circuit debate that took place in Manning v. Caldwell between authors of the en banc court’s opinion and the principal dissent’s author. Powell applied Noonan’s ideas from Persons and Masks of the Law about “roles that people play in the legal process and the masks that they sometimes assume or impose in that process.” Powell argued that the author of the dissent went beyond a “vigorous assertion of his views” by implying catastrophic outcomes as a result of the court’s opinion, and further suggested that “Caesar Augustus would be envious” of the majority’s adjudicative power. Powell’s presentation, a warning about the temptation to “wear the mask of champion in a cosmic conflict,” enhanced understanding of the current state of federal constitutional law, and in turn underlined the continuing value of Judge Noonan’s distinction.

Conte traced the history of change in European history, focusing on the 18th century when national traditions shifted from Christian-focused to those based on laws and representative assembly—traditions that underpin modern states to this day. He noted that Noonan’s articles and books were very personal, almost autobiographical. Pasciuta outlined the multi-source and multidisciplinary nature of Noonan’s studies in legal history. “European legal historians have tended to silo their research,” she explained. “It is only recently that they have resurrected the multifaceted approach taken by Noonan.” She outlined the manner in which he drew ideas from religious history and legal history in his scholarship, and, importantly, engaged the interplay between the two.

Judge Noonan’s lifelong Catholic faith and expertise in canon law were the main focus of “Law and Religion,” moderated by Calum Carmichael, Emeritus Professor of English at Cornell.

Professors Blandine Chelini-Pont from the Université d’Aix-Marseille, Richard Helmholz from the University of Chicago School of Law, and Patrick Brennan from Villanova University’s Charles Widger School of Law discussed theological debates on abortion and the time of “ensoulement” of a fetus, marriage laws in Roman and canon law, and Judge Noonan’s moral development on the question of capital punishment. Helmholz continued Pasciuta’s examination of Judge Noonan’s interdisciplinary scholarship by presenting the reception of Power to Dissolve, Judge Noonan’s book on marriage in Roman and canon law.

Moderating the “Law and Ethics” session of the conference, Dean Erwin Chemerinsky noted “that John Noonan was such an important member of the Berkeley Law faculty for so many years. Even after he went under the Ninth Circuit, he remained very involved in this law school.” Professor Abby Wood spoke about political corruption in empirical terms using Judge Noonan’s book Bribes as a starting place. She said Noonan “broadens our understanding of what the definition of a bribe is, by looking outside of the law, to what moralists might think a bribe is, to what the public might expect, and what might actually bring government enforcement. To me, that’s a powerful and rather agnostic look at public-interest perverting behavior.”

University of Minnesota Law School Professor Richard Painter, a former chief White House ethics lawyer, is an outspoken critic of President Donald Trump and one of the lawyers representing the plaintiffs in Citizens for Responsibility and Ethics in Washington (CREW) v. Trump. Painter’s talk, “Bribes in the Age of Emoluments,” linked the history of mercantilist bribery in the British Empire to our modern challenges in the United States. He  questioned if we are, “moving back to a system where politics will determine who the winners are in the economic sphere; where government, instead of regulating economic activity, will promote economic activity, and the squelcher of competition?”

The variety of panel topics reflect the richness of Judge Noonan’s career and interests before and after his time at the Ninth Circuit. “Judge Noonan knew why and most of all how to study the law “by placing the person at the center of the law,” remarked Professor Laurent Mayali, director of the Robbins Collection and co-organizer of the event.

Noonan’s theories about the law, case decisions, and scholarship have influenced countless individuals and subsequently informed the work they pursue in many areas of law, policy, and jurisprudence. He carried this vision with him throughout his life as a judge and scholar, and as the symposium demonstrated, his intellectual legacy will continue to shape the minds of law students and jurists for many generations. Mayali credited Noonan for playing a fundamental role in the history of the Robbins Collection at Berkeley Law, helping to establish the research center devoted to civil and religious law, and fostering Lloyd Robbins’ wish to create a place where legal scholars could work toward “solving the legal issues of today.”

Session 1: Law and the Person