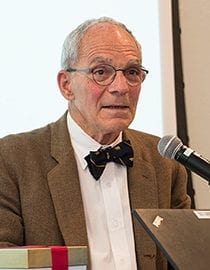 Antonio Rossmann has served in the past 35 years as counsel in some of California’s and the West’s leading water and land-use proceedings, including the Owens Valley groundwater war, the Mono Lake public trust litigation, South Pasadena’s resistance to the 710 freeway, Nevada’s opposition to the MX missile and the Yucca Mountain nuclear repository, the State Water Project Monterey Amendments challenge, the Imperial-to-San Diego Colorado River water transfer, and protection of California groundwater regulation against constitutional attacks.

In 2010 the Los Angeles Daily Journal named Mr. Rossmann one of the top 100 lawyers in California, and in 2012-2013 he served as a consultant on water resources law to the U.N. Food and Agriculture Organization in Rome.

Mr. Rossmann, an honors graduate of Harvard College (1963) and Harvard Law School (1971) and former editor of the Harvard Law Review, has taught water resources, land use, and constitutional law for the past 30 years, since 1991 at Berkeley Law. Previously he taught at Stanford, Hastings, UCLA, and as Fulbright Lecturer at the University of Tokyo.

A former chair of the State Bar of California’s Committee on the Environment and the first executive director of the National Center for Preservation Law, Mr. Rossmann is the past president of the Harvard Law School Association of Northern California and founding chair of the Harvard Law School Association Environmental Law Section.

Mr. Rossmann served from 1971 to 1972 as law clerk to Justice Mathew Tobriner of the California Supreme Court. From 1963 to 1968 Mr. Rossmann served as a naval officer and decorated Vietnam veteran (including two years of combat duty in the Tonkin Gulf), to the rank of Lieutenant Commander. An active athlete, Mr. Rossmann was twice the Harvard University sculling champion and more recently served as president of the Western States Endurance Run.