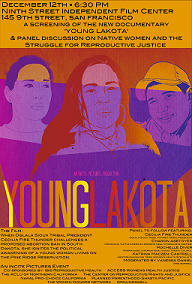 Incite Pictures/Cine Qua Non, in co-sponsorship with the International Indian Treaty Council, the Center on Reproductive Rights and Justice at Berkeley Law, the Women Donors Network, Groundswell, Ibis Reproductive Health, ACCESS Women’s Health Justice, and the ACLU of Northern California are excited to announce a free screening of Young Lakota, Incite’s recently completed documentary that chronicles a political battle over reproductive rights and tribal sovereignty on the Pine Ridge Reservation.

Zakiya Luna will discuss race, gender, and social movements, based on her practical experience and research on the reproductive justice movement as part of “Race and Social Movements: What Reproductive Justice Teaches Us.” The presentation is part of the Center for Race and Gender’s Thursday Forum Series.

Affiliated Faculty Melissa Murray will present a forthcoming paper entitled, “Remaking Public Sex” at the Center for the Study of Law and Society’s annual speaker series.

Thought leaders from diverse disciplines will examine the constitutive power and widespread impact of current laws related to abortion in the United States. Discussion will focus on Planned Parenthood v. Casey’s undue burden standard; the way this “standardless standard” is playing out in courts across the country, altering people’s access to and experience of abortion care. How have legal frames influenced the public’s understanding of abortion and its perceptions of those who seek abortions? How do abortion regulations interact with other areas of law, including freedom of speech? How do abortion restrictions harm individuals, families, and communities, threatening access to services, compelling parenthood, and compounding other forms of marginalization?

CRRJ and Visiting Researcher Dr. Elena Gutiérrez won Access to Justice Awards for high-impact research with “Bringing Families out of ‘Cap’tivity: the Need to Repeal the CalWorks Maximum Family Grant Rule.” The awards were presented by ACCESS Women’s Health Justice at its 20th anniversary celebration in Oakland. Other 2013 Access to Justice awardees were: Renee Bracey Sherman for Practical support and overnight housing; Alissa Perrucci and the Women’s Options Center for Excellence in Counseling for Abortion Care; and Mardi Kildebeck and the Mary Wohlford Foundation as a model funder for reproductive health, rights, and justice. 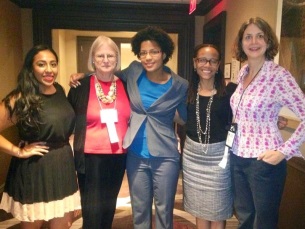 Zakiya Luna and Kristin Luker, along with Stephanie Alvarado, Dorothy Roberts, and Jeanne Flavin discussed reproductive justice in front of a packed audience at the Sociologists for Women in Society annual conference. Jill E. Adams and Alicia Walters (CoreAlign) shared their insights and reflections about the past, current, and future composition of the reproductive justice movement and its prospects for success at the annual Law Students for Reproductive Justice Leadership Institute. They addressed the roles of power, privilege, and oppression in movement dynamics, as well as tools and opportunities to build and strengthen its constituencies.

Forty years after the Supreme Court’s landmark decision in Roe v. Wade, the fight for reproductive justice continues. Last year, 25 states adopted restrictions on access to abortion, including abortion bans, forced ultrasound laws, bars on insurance coverage, biased counseling requirements, and unnecessary and onerous regulations for providers. Under siege, clinics are closing. Come learn about national trends in reproductive rights and participate in a discussion on the future of reproductive freedom in the United States.

CRRJ’s own Jill Adams, Elena Gutiérrez, and Zakiya Luna will be presenting separately at an upcoming conference, which intends “to advance reproductive justice by exploring the intersections of activism, advocacy, and academia,” to be held at the University of Michigan May 29-31, 2013. 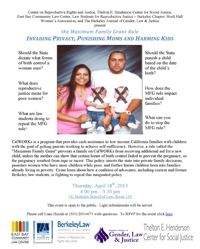 CalWORKs is a program that provides cash assistance to low income California families with children, with the goal of getting parents working and families out of poverty. However, a rule called the “Maximum Family Grant” prevents a family on CalWORKs from receiving additional aid for a new child, unless the mother can show that very limited forms of birth control failed to prevent the pregnancy, or the pregnancy resulted from rape or incest. This policy inserts the state into private family decisions, punishes women who have more children than the state approves, and further harms children born into families already living in poverty.

Come learn about how a coalition of advocates, including current and former Berkeley law students, are fighting to repeal this misguided policy. This panel is convened by the Center on Reproductive Rights and Justice at Berkeley Law and the East Bay Community Law Center. It is cosponsored by the Berkeley Journal of Gender, Law & Justice, Berkeley Law Students for Reproductive Justice, Boalt Hall Women’s Association, STOPDV, and Thelton E. Henderson Center for Social Justice.

To download the issue brief, “Bringing Families out of ‘Cap’tivity: the Need to Repeal the CalWORKs Maximum Family Grant Rule,” click here.

“40 Years After Roe: Examining the Social, Political, and Economic Impact of the Constitutional Right to Abortion”
12:00-1:00 PM | ACLU of Northern California

This year marks the 40th anniversary of the United States Supreme Court’s landmark decision in Roe v. Wade(1973). After four decades, the right to abortion remains one of America’s most controversial issues. What is the current state of reproductive freedom in California and beyond? Join us for a panel discussion regarding the social, political and economic impact of the Court’s decision on women, families and communities across America.

Zakiya Luna, UC President’s Postdoctoral Fellow, Center on Reproductive Rights and Justice, presents Having grown from a handful of marginal organizations, the reproductive justice movement serves as an exemplar of a U.S. Social movement that made a “Non-resonant” framing choice while still achieving the type of success much social movement scholarship suggests can only be achieved through resonance seeking. This presentation draws on interviews, archival documents and observation to examine some of the factors that influences the framing choice and the consequences of it on the wider women’s movement.

Jill E. Adams, Executive Director, to represent the Center on Reproductive Rights and Justice at a press conference announcing the introduction of an assembly bill that would increase access to abortion. AB 154 (Atkins) will expand the types of trained healthcare professionals who can provide abortions, thereby increasing access and improving care. 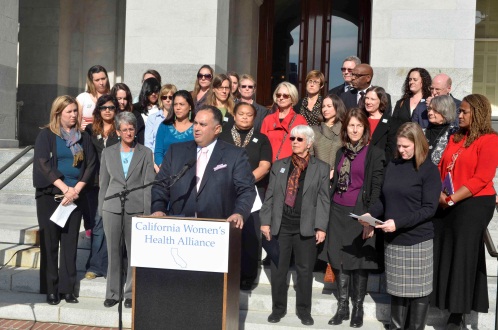 Kristin Luker, Faculty Director, Center on Reproductive Rights and Justice at Berkeley Law to speak at upcoming conference: Liberty/Equality: The View from Roe’s 40th and Lawrence’s 10th Anniversaries, to take place January 18-19, 2013, at the UCLA School of Law. American Constitution Society is co-sponsoring the conference with the UCLA School of Law, the Williams Institute, the Yale Information Society Project, and the Program for the Study of Reproductive Justice. As we commemorate the anniversaries of two landmark Supreme Court decisions, Roe and Lawrence, the conference will bring together leading experts on gender and sexuality to analyze the past, situate current conflicts, and contemplate the future. The conference will feature panels on sexual freedom, constitutional frameworks, social movements, religious liberty, families, and information.