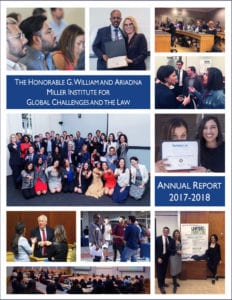 The Honorable G. William and Ariadna Miller Institute for Global Challenges and the Law is pleased to announce the publication of our latest Annual Report.  The report highlights our programs and events in international and comparative law for 2017-2018.

Thank you to everyone who contributed to our work.

The history and achievements of the International Human Rights Law Clinic (IHRLC) and the Human Rights Center are featured in the Fall 2018 edition of the Transcript.  Prof. Laurel Fletcher, Faculty Co-Director of the Miller Institute and Director of the IHRLC, led the first case of the clinic — the plight of Haitian descendants living in the Dominican Republic who were being denied the rights of other citizens (including buying property or going to school).

[T]he clinic carried the grievances of two Haitian girls to the Inter-American Court of Human Rights, which eventually ordered the Dominican government to recognize their nationality. “I was always surprised because it felt like we were such a small program, so you tend to think, ‘What can we do?’’’ says Fletcher, now the clinic’s co-director and a clinical professor of law. “I’ve been amazed at how much we’ve been able to accomplish.”

Top scholars from around the world gathered in Berkeley on September 15 to honor the academic legacy of Professor David Caron.  Speakers included Judge Charles Brower, formerly of the Iran-United States Claims Tribunal, Judge Joan Donoghue of the International Court of Justice, Professor Bernard Oxman of the University of Miami, as well as Professors Richard Buxbaum and Harry Scheiber of Berkeley Law.

“The reach and significance of David’s work is overwhelming,” said Dean Erwin Chemerinsky. “He was a successful dean, a renowned scholar, a popular teacher, an astute arbitrator, a respected judge—the list goes on.” Professor Caron held leading roles in international law and dispute resolution, serving as a judge at the Iran-U.S. Claims Tribunal and the International Court of Justice in The Hague. He was also president of the American Society of International Law and the Institute for Transnational Arbitration.

Read more about the conference here.

Share your thoughts and memories about Professor Caron here. Digital Refuge (digitalrefuge.berkeley.edu), a new interactive website that “maps the perilous ordeals of thousands of displaced people from the Middle East, Africa and Asia through their own personal stories and social media posts,” was unveiled on June 20, World Refugee Day. This multimedia project was organized by researchers from UC Berkeley and UC Davis, including project co-leader Katerina Linos, Berkeley Law professor and co-director of the Miller Institute for Global Challenges and the Law. Analyzing social media data, ethnography and non-governmental organization databases, the website allows “users to explore camp conditions and compare on-the-ground experiences to government reports. Their data is based on more than 6,000 interviews and 10,000 Facebook posts.”

The website was developed through a Carnegie Fellowship awarded to Professor Linos, through seed funding from CITRIS and the Banatao Institute awarded to the project co-leaders Professor Linos and Professor Anupam Chander of UC Davis, and with support from the Miller Institute.

Read more about the project here. Professor Laurel Fletcher is the co-chair of the Transitional Justice and Rule of Law Interest Group, and Professor Katerina Linos is a member of the Editorial Committee of the American Journal of International Law. Professor Saira Mohamed, Jeff Bleich (’89), and Jarrod Wong (’99) continued their tenure on the Executive Council, which serves as the governing body of the organization. Kate Jastram (’86), former Miller Institute Executive Director and Berkeley Law lecturer, serves as co-chair of the International Refugee Law Interest Group.

A record eight Berkeley Law students attend the Meeting as 2018 ASIL Fellows.  The fellowship, sponsored by the Miller Institute and the Advanced Degree Program Office, allows students the opportunity for knowledge and networking found at ASIL.  To read the reports on their experiences in Washington DC, click here.

According to the 2019 edition of the US News and World Report of law school rankings, released on March 20,  Berkeley Law placed in the top ten of Best International Law Programs — as well as Best Law Schools — in the nation.

Eric Stover quoted by The Jakarta Post (December 5, 2017) on Yap Thiam Hien Foundation holds third human rights lecture: “Terror has been everywhere and threatening our security,” he said, adding that to counter terrorism, human rights must be upheld. “In other words, torture should not be employed at any stage.”

Kim Thuy Seelinger quoted by Dailymirror (January 20, 2018) on The poor woman who put Hissene Habre in jail:  [T]he verdict represented a “huge brick in the wall that establishes sexual violence as international crimes.”

Alexa Koenig quoted by Fast Company (March 8, 2018) on Erasing history: YouTube’s deletion of Syria war videos concerns human rights groups: “The human rights community that works in digital tech has come to understand that creating new apps and channels doesn’t make sense for anybody … YouTube controls that space, and they will for the foreseeable future.”

The Miller Institute for Global Challenges and the Law is saddened by the loss of David D. Caron (’83), the C. William Maxeiner Distinguished Professor of Law (Emeritus), who passed away on February 20 at the age of 65.  He was one of the founding faculty directors of the Miller Institute and was instrumental in its success over the years.

He left Berkeley Law in 2013 to become Dean of the Dickson Poon School of Law, King’s College London.  David also served as president of the American Society of International Law, a judge at the Iran-US Claims Tribunal in The Hague, and sat as an ad hoc judge‎ at the International Court of Justice.

His death is an enormous loss not only to his family, but also to his friends, colleagues, and the many students whose lives he enriched over the years.

A memorial and symposium honoring his life and work at Berkeley will be held on September 14 and 15, 2018.  For more information, click here.

Please share your thoughts and memories about Professor Caron here. The Fellowship, established in 2012, will allow the students to attend the annual meeting of the American Society of International Law, April 4-7, 2018, in Washington DC.  The 2018 theme is “International Law in Practice.”

The ASIL Annual Meeting is the largest and most important gathering each year of international law practitioners, policymakers, and scholars, and features lectures and panels made up of the world’s most eminent international lawyers, including many Berkeley Law faculty and alumni. Attending the meeting is an unparalleled opportunity for students to expand their knowledge and build their network.