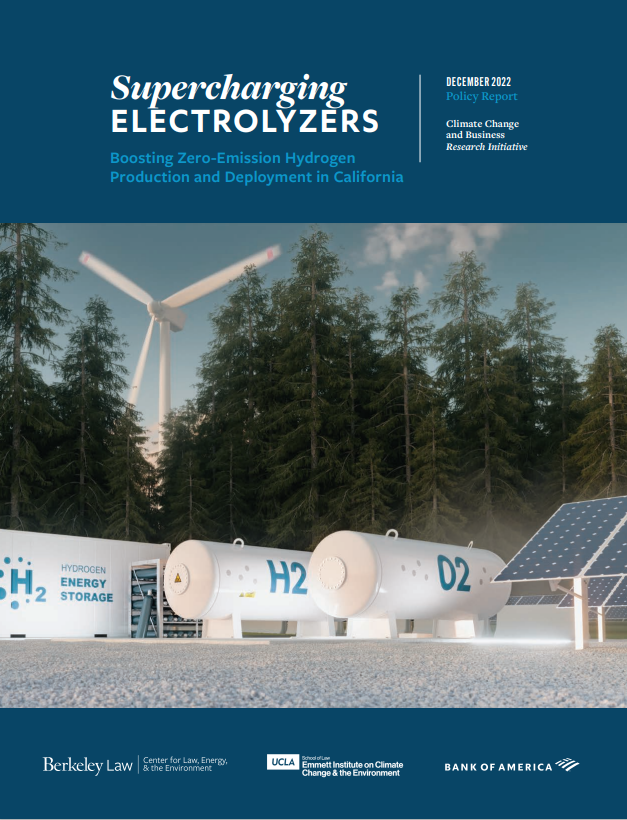 be generated from surplus renewable energy resources (like solar or wind) to create zero-emission (or “green”) hydrogen. The clean electricity powers a device called an electrolyzer, which uses the process of electrolysis to separate water into oxygen and hydrogen. The hydrogen can then be used to help decarbonize high-heat industrial activities, provide long-duration energy storage, and fuel transportation, especially heavy-duty trucks, ships, and possibly airplanes.

To address the challenge, the Center for Law, Energy and the Environment (CLEE) at Berkeley Law and the Emmett Institute on Climate Change and the Environment at UCLA Law are today releasing a new report, Supercharging Electrolyzers: Boosting Zero-Emission Hydrogen Production and Deployment in California. It highlights policies that could scale zero-emission hydrogen in a way that reduces fossil fuel demand, enhances state energy resiliency, creates new job opportunities, and contributes to improved air quality in disadvantaged communities. The recommendations could also help the state secure a portion of the $8 billion in competitive grant funds for Regional Clean Hydrogen Hubs that the U.S. Department of Energy announced as part of the Infrastructure Investment and Jobs Act of 2021.

California is well positioned to leverage its clean energy policy and cleantech industry to reduce the costs of electrolysis-based zero-emission hydrogen. The state is already increasing investments and policy support for electrolyzers. For example, the 2022-2023 California budget included $100 million for 10 to 15 commercial demonstration projects and will focus on both lowering the cost of electrolyzers and demonstrating the use of zero-emission hydrogen for industrial activities, power plants, and energy storage. In September 2022, Governor Newsom signed a bill requiring the California Air Resources Board, California Energy Commission, and the California Public Utilities Commission to identify the role of electrolytic hydrogen in helping to achieve the state’s climate goals.