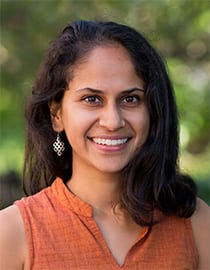 Astha Sharma Pokharel is a Clinical Teaching Fellow at the International Human Rights Law Clinic. Prior to joining the clinic, Sharma Pokharel was a Bertha Justice Fellow at the Center for Constitutional Rights. There, she worked to defend the constitutional rights of advocates for justice in Palestine, and advocates for environmental justice, including in cases such as Bronner v. Duggan, defending an individual was sued for the American Studies Association’s decision to endorse the call for a boycott of Israeli academic institutions, and Energy Transfer Partners v. Greenpeace, defending an organizer who was sued by a pipeline company for resisting the Dakota Access Pipeline.

Sharma Pokharel represented residents of Cancer Alley in Louisiana resisting the petrochemical industry, including in cases such as White Hat v. Landry, a constitutional challenge to the state anti-protest critical infrastructure law. She also represented Palestinian landowners seeking to intervene in Silber v. Airbnb to challenge the illegal and discriminatory Israeli settlement enterprise in the West Bank. In the spring and summer of 2020, she was on legal teams challenging the continued detention of immigrants during the COVID-19 pandemic in cases such as Dada v. Witte. After completing her J.D. at New York University in 2017, Sharma Pokharel worked at Namati, an organization focusing on legal empowerment. During law school, she was a student advocate in the Global Justice Clinic, and also in the Immigrant Rights Clinic, representing individuals in deportation proceedings.