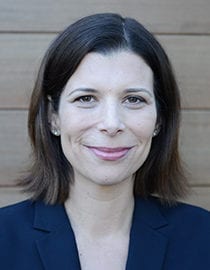 Alexandra Robert Gordon has been a Deputy Attorney General in the California Department of Justice since 2009. As a member of the Government Law Section, she represents California’s constitutional officers in state and federal trial and appellate courts. Ms. Gordon has handled many high-profile cases from the trial court to the United States Supreme Court, including challenges to California’s law prohibiting the possession of large-capacity magazines, banning possession of shark fin, and requiring the disclosure of major donor information by charitable organizations. She received a California Lawyer of the Year Award in 2014 for her work defending the constitutionality of a law that prohibits mental health professionals from engaging in treatments intended to change the sexual orientation of a minor. Before joining the Attorney General’s Office, Ms. Gordon was a supervisor and staff attorney at the Ninth Circuit Court of Appeals, where she currently serves as an Appellate Lawyer Representative.