The Berkeley Law Trial Team is one of the top-ranked law school mock trial programs nationwide.  On the team, students have the opportunity to hone their advocacy and develop their skills as trial lawyers.  The Trial Team travels across the country to represent Berkeley Law in prestigious civil and criminal trial competitions.

On the Trial Team, students learn how to prepare a case for trial.  They review legal documents, witness statements, and physical evidence.  In competition they argue motions, deliver opening statements, conduct direct and cross examinations, and deliver closing arguments.  All new members participate in the Trial Competitions class, taught by program director and trial lawyer Spencer Pahlke.  All competition teams are coached by our exceptional Trial Team alumni. 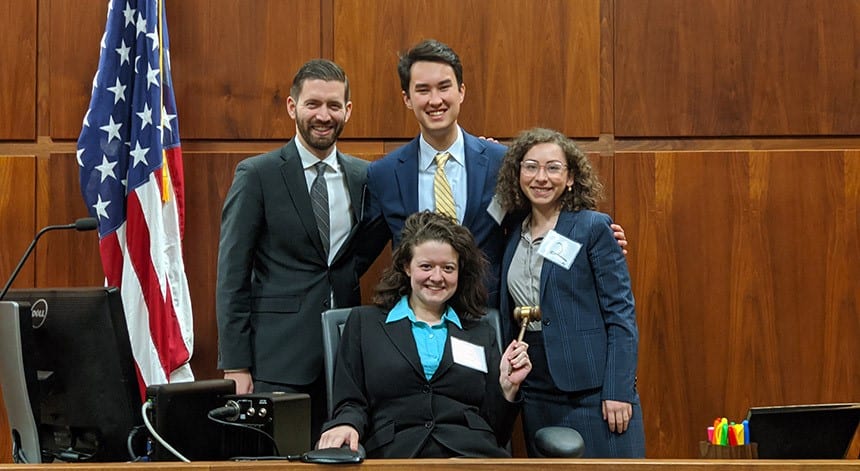 Beginning in 2022, Berkeley Law will be offering the Pahlke Trial Advocacy Scholarship to students who show a demonstrated interest in civil or criminal trial advocacy, have participated in activities such as mock trial in college and/or high school, have been successful in such competitions, and/or show significant interest in participating in trial competition at law school. Prospective recipients will be identified, screened, and selected by the Dean of Admissions of the law school, and the amount of the awards will be flexible from year to year.

On November 5–7, 2020, four intrepid advocates experienced the first (and hopefully last) virtual version of the National Board of Trial Advocates’ Tournament of Champions. For the 2020 competition, advocates argued the case of Fuller v. CostLow: Jordan Fuller, on behalf of her son Sam, sued CostLow Grocery for negligence after her son suffered an allergic reaction to a sample he ate in the store. Plaintiffs Jenna Forster (’22) and Cheyenne Smith (’22) demanded accountability from CostLow. It could have warned its customers about the dangers of its products by providing a warning It just didn’t. On the other side, Defense team Virginia Lyon (’21) and Emma Nicholls (’21) demonstrated that only one person could have prevented this tragedy—Jordan Fuller herself. She knew her son had a peanut allergy. All she had to do was ask about the ingredients before handing it to him. The theories were tight, the themes quippy, and the cases-in-chief streamlined, but one question remained—would the judges be convinced?

Bright and early on November 5th, our team woke up in four separate places (and in Emma’s case, a different time zone!), eager to see if we had successfully adapted our advocacy to the Zoom world. Over the six weeks prior, Jenna, Virginia, Emma, and Cheyenne spent countless hours writing and re-writing pieces, trying out new virtual advocacy techniques, and making plenty of jokes about peanuts. Finally it was time to find out if the preparation paid off.

Plaintiffs Jenna and Cheyenne breezed through Round 1. The statements were smooth and examinations were conversational.  During Round 2, Emma and Virginia delivered a similarly clean performance, staying above the fray in an odd trial. After Day 1, Berkeley’s TOC team was undefeated, winning all six possible ballots.

Early success was great, but it all came down to Day 2. Rounds 3 and 4 were technically smooth but we worried about whether we had managed to stand out against two confident opponents. By the end of Day 2, we knew we had done everything we could, but had absolutely no clue what might have happened on the ballots.

The post-preliminary ceremony that usually has food, drink, and celebration became a brief Zoom call with results. However, we all happily cashed in that experience for this outcome: with a 9-3 record and a triple-digit point differential, the tournament director announced that Berkeley was a semi-finalist.

Few things can make waking up on a Saturday at 6:30 AM an enviable position, but moving on in a mock trial tournament is one of them. The Plaintiff side started off Day 3 with a close round against an excellent team. Jenna beautifully adapted to our opponent’s creative theory with an impeachment by omission that landed perfectly. Cheyenne turned a barrage of objections on direct into an opportunity to make the expert look even better. After the ballots were in, Jenna sent a text: “Did we…win?”

That meant we were moving on to the final round. For the sixth round of mock trial in three days, our 3L powerhouse Defense team went head-to-head in an inter-UC battle, facing UCLA. Emma exercised phenomenal witness control, utilizing new techniques she rehearsed the night before. Virginia delivered a powerful closing argument, rising to the nearly impossible task of balancing faulting a mother without attacking her parenting.

After all the ballots were tabulated, the tournament director announced that, although it was close, UCLA had won. As we made our way over our team Zoom debrief to commiserate, we reflected on what we had accomplished. We put all we had on the table throughout unorthodox circumstances and still managed to grow as advocates—and finish at second place in the nation. If you’d like to see our team in all its glory, you can watch the final round here.

The backgrounds have been put away, the camera stands taken down, and the Google Folders closed, but our fires remain lit. I, for one, can’t wait to see what we accomplish next. Spencer Pahlke has been the Program Director of the Berkeley Law Trial Team since 2007. Spencer teaches the Trial Competitions Course, a mandatory class for all Trial Team Members, and he oversees all the Trial Team’s competitions. Spencer is also a Shareholder at Walkup, Melodia, Kelly & Schoenberger, where his practice focuses on catastrophic personal injury and wrongful death cases involving defective medical devices, vehicular collisions, dangerous conditions of public and private property, and medical malpractice.

A video of members from the Berkeley Law Trial Team competing in the final round of the 2020 NBTA Tournament of Champions is located above.