The codification of habeas corpus can be traced to the 17th century in England, when Parliament passed the English Habeas Corpus Act of 1679. The English Parliament is also responsible for inventing the concept of habeas suspension during wartime. This conception of habeas and its suspension were highly influential on American habeas law in the 18th century, and are still debated to this day.

These modern debates about the meaning of the Suspension Clause in the United States have happened largely in a historical vacuum. There is a wealth of precedent that can inform these contemporary conversation, but that wealth is often ignored. In her book, Habeas Corpus in Wartime: From the Tower of London to Guantanamo Bay, Professor Amanda Tyler presents this forgotten history in a very comprehensive accounting. It recovers the neglected history of habeas corpus suspension in the U.S., showing us the arguments we are having now are not new. Thomas Jefferson requested, and was denied, habeas suspension, Abraham Lincoln famously declared a suspension during the Civil War, and the internment of Japanese-Americans during World War II required a suspension. However, all of these examples of habeas corpus suspension did not happen without the same fervent debate we see now, when discussing the role and power of suspension in America’s ongoing wars.

The recent conference, “Habeas Corpus and the Constitution in Wartime: A Comparative Approach” explored this history, among other related topics.

Throughout the day, conference attendees discussed topics as varied as the role of history in constitutional interpretation, the separation of powers in wartime, presidential powers during the Civil War, the War on Terror and the application of Constitutional law, and the intersection of law and politics in habeas corpus. The conversation was enriched by the participation of legal scholars from the United Kingdom, judges from the U.S. Court of Appeals, and other international scholars.

The conversation about judicial powers and wartime suspension was of particular interest to many of the participants. The concept of war has changed since habeas corpus was first suspended in the United States during the Civil War. Instead, war has become a more drawn out affair, without clear boundaries. Participants discussed ideas like sunset clauses, which would end the suspension of habeas corpus after a certain period of time, and judicial review over suspension, which would act as a check against both the legislative and executive branches. In the past, the courts have acted as a check to these powers, and have found habeas suspensions to be unconstitutional. 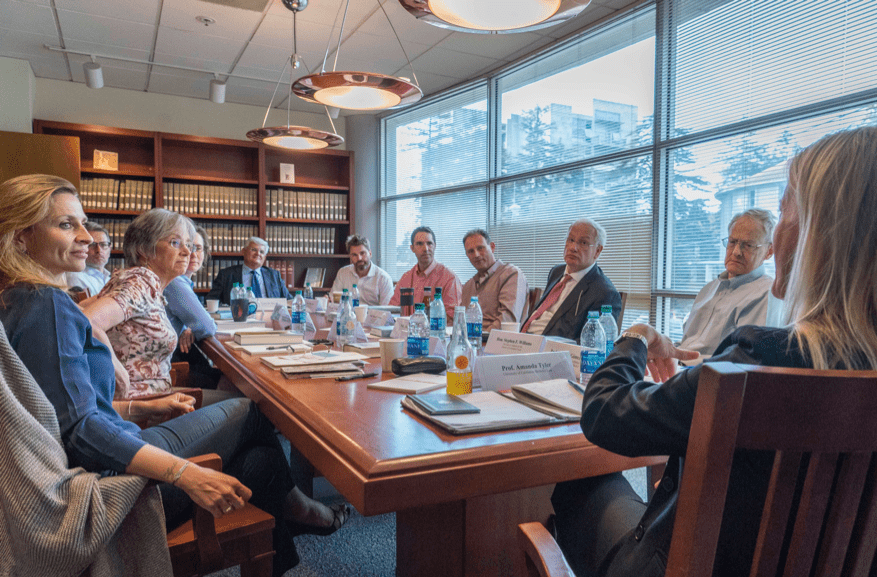 For Professor Amanda Tyler the conference “…was an incredible opportunity to bring together scholars and jurists from a range of legal traditions to engage in a fascinating and immensely rich discussion of how law should function in wartime. It was a special privilege to have my own work serve as the impetus for our discussions. And, I am deeply grateful to the Robbins Collection and Laurent Mayali for making this great event happen.” This conference reflects the important role of the Robbins Collection as a research center and library that promotes civil law research, strengthening connections between Berkeley Law and international academic institutions. For Professor Tom Poole, he said, “To discuss a great book about the past, surrounded by great books from the past. It’s hard to think of anything finer.”