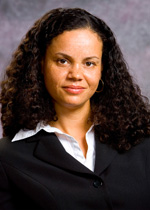 Steinbach founded the center’s Clean Slate practice in 2001, an innovative program designed to assist people with criminal records for non-violent offenses overcome barriers to employment, housing, education, and civic participation. Most recently EBCLC’s clinical director, Steinbach has also been a lecturer at Boalt, co-teaching the center’s clinical companion seminar since 2003.

In other leadership roles, Steinbach was active in the Berkeley Law Foundation and Law Students of African Descent while at Boalt, and served as student representative on the law school Admissions Committee. She arrived at EBCLC as contract attorney in the Income Support Practice six years ago following a post-graduate fellowship at the California Appellate Project. Among her many honors, Steinbach was the recipient of the inaugural Thelton E. Henderson Social Justice Prize in 2006.

For the Berkeley native and lifetime Bay Area resident, the appointment as the center’s executive director holds special meaning.

“The East Bay Community Law Center felt like home from the moment I walked in the doors six years ago,” Steinbach reflected. “As EBCLC’s director, I can continue to support our mission to provide excellent legal services to low-income communities and exceptional hands-on training, supervision and mentorship opportunities for Boalt Hall students.”

As the community-based component of Boalt’s clinical program, EBCLC is recognized as one of the foremost poverty law clinics in the country. Approximately 125 students work under the supervision of 14 clinical instructors each year, serving some 4,000 clients. The clinic provides legal services in housing law, income support, health law, community economic justice and criminal law.

Steinbach takes the helm at EBCLC as it successfully completes a $3.25 million “Building for Justice” capital campaign which will culminate in the opening of the center’s new building next month at 2921 Adeline Street in Berkeley. She succeeds Jeff Selbin, who served as executive director from 2001 until December 2006, when he was appointed as a full-time clinical professor of poverty law at Boalt. Selbin will continue with the center as faculty liaison.

“It is an exciting time for the law school and EBCLC,” Steinbach said. “I am honored, humbled and thrilled to be a part of it.”