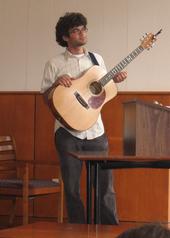 Of all the terms law students use to describe their first-year classes, “musically inspiring” rarely makes the list. But Josh Keesan ’09 is a rare breed.

Raised in a Zen Buddhist community in Rochester, N.Y., Keesan has spent much of his life honing a talent for music and an affinity for humor. Last year, those forces came together in unlikely environments such as Contracts and Torts—prompting him to record an EP of original, law-related songs entitled The Law of Rock, Volume 1.

“I’ve always been a musician and I was looking for ways to keep that up as a 1L,” Keesan says. “I think it just sort of hit me in a Contracts class one day that my classes were prime material for songs. It was important to me to have a creative outlet, and it just sort of took off from there.”

Keesan describes his sound as “folk pop law rock.” Visitors can hear audio clips on his website (joshkeesan.com), which urges students to “put down your commercial outlines and treatises: here, for the first time, you can learn complex legal doctrines through these digestible pop-rock gems.”
In “Promissory Estoppel,” Keesan sings:

His catchy chorus in “Contributory Negligence”:

“Being able to make light of the 1L experience is therapeutic and a lot of people can relate to it,” says Keesan. “I’m not sure what the reception would’ve been like at other schools, but my Boalt classmates gave me great feedback and encouraged me to keep writing. It says something about how creative our student body is, and even the reaction from professors has been thrilling.”

That reinforcement—and a Wall Street Journal article about Keesan’s musical exploits—has fueled his ongoing work on a follow-up, full-length album. He recorded songs from Volume 1 “quickly and a bit sloppily” in his bedroom, but vows that Volume 2 will be recorded in better conditions.

While his law-oriented music is primarily a solo endeavor, Keesan also plays in a band called The 45s with fellow Boalt students Sarah Wright ’09 and David Marty ’10. They have performed at Boalt’s charity auction and other graduate school parties, both on and off campus.

“It always gets a little harder as the semester winds down and finals approach, but we try to play as much as we can,” Keesan says. “We sing my songs and covers, and I guess you could say we’re sort of a party band.”

In addition to boosting Keesan’s sales and notoriety, the Wall Street Journal story and law blog comments about his music led to more humorous situations. First, he was approached by a website that sells legal-related humor items and gag gifts for lawyers. Then came a heated online showdown between Keesan’s following and fans of Mikey Mel & the JDs from the University of Georgia School of Law who claimed that band, not Keesan, is the true law school music pioneer.

“I think there’s enough room for both of us,” Keesan says with a laugh. “I don’t take myself too seriously, and I think it’s really important to have a sense of humor about your avocation, whatever it may be.”

Keesan is focusing his studies on copyright, fittingly with an eye toward music file-sharing issues. In the meantime, there is work to be done: finishing The Law of Rock, Volume 2. He plans a blues anthem called 12(b)(6), a song about the Rule Against Perpetuities, and a soulful ditty on adverse possession.

“The whole thing has been a lot of fun,” Keesan says. “To get an email from a law student in Washington, D.C. who tells you, ‘My professor just cited your song in class,’ that’s pretty cool.”