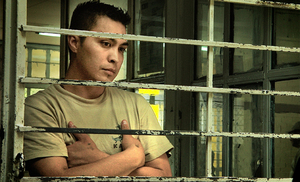 In December 2005, aspiring dancer Antonio Zúñiga was taken off a street in Mexico City, whisked into a police car, and told he had committed a murder. Kept in a holding cell for two days without being informed of the charges against him, he was soon sentenced to 20 years in jail.

Hernández and Negrete sought to expose a justice system they view as corrupt and compromised by a draconian sense of guilt and innocence. In Mexico, those arrested are in practice considered guilty until proven innocent, and the majority of those accused never see a judge or an arrest warrant. Of those who do go to court, Mexico City’s conviction rate is 95 percent, even though 92 percent of verdicts lack scientific evidence.

“Today most Mexicans don’t know what’s wrong with justice in Mexico,” Hernández says. “They perceive the patient coughing, but they don’t know what’s causing the infection. We think our film will help them visualize what is wrong.”

Facing increased pressure to solve a soaring crime rate, Mexican police are often suspected of charging people without reasonable cause—and of targeting poor people who lack resources for a defense.

Zúñiga’s closed-door trial included no physical evidence that linked him to the crime, and several witnesses testified that he was at his street market stall at the time of the murder. Even though Zúñiga had no link to the victim, no motive, and no criminal history, Judge Hector Palomares found him guilty and sentenced him to 20 years in prison.

The same year Zúñiga was arrested, Hernández and Negrete completed their first courtroom documentary, “El Túnel” (The Tunnel), a short firm that stirred debate about reforming Mexico’s constitution to include presumption of innocence. It featured the case of a young man, Marco, convicted of stealing a car—even though the victim told detectives, prosecutors, and judges that Marco was not the culprit.

Marco’s release led Hernández and Negrete to launch “Lawyers with Cameras,” a multi-pronged effort to open the Mexican legal process to public scrutiny. “El Túnel” sparked many requests for help—including one on behalf of Zúñiga—who had lost his appeal and seemed destined to serve his 20-year sentence.

After seeing “Presumed Guilty” this past spring, Berkeley Law Professor Charles Weisselberg invited Hernández and Negrete to co-teach a course with him this fall entitled 48 Hours: Early decisions in Criminal Cases—A Comparative Perspective.

“It is a powerful film,” says Weisselberg, who taught Negrete in a 2006 seminar on risk and the criminal justice system. “It has opened the eyes of many Mexican citizens and officials, since trials are not routinely recorded or transcribed.”

Hernández and Negrete spent months filming in the neighborhood where Zúñiga lived to verify his alibi. Later, conducting research inside the Berkeley Law library, they discovered that Zúñiga’s private defense lawyer had a forged license—meaning he’d been unable to represent Zúñiga legally and that Zúñiga could apply for a retrial.

After a Mexico City appellate court voted unanimously to order a retrial, Hernández and Negrete obtained permission to film the new proceedings. Despite another guilty verdict, their video footage convinced an appeals panel to free Zúñiga in April 2008—after 842 days in jail.

“So many Mexicans believe that we have an American courtroom that will have the prosecutor, the defense, the judge and the trial,” Negrete says. “They believe that because they have never been in contact with a trial.”

“Presumed Guilty” will likely have its theatrical release in Mexico this fall. Negrete and Hernández hope the film will push forward a law requiring every interrogation and criminal trial in Mexico to be videotaped.

Effective 2016, Mexico is poised to change its criminal justice system from one that presumes guilt at trial to one that presumes innocence. If this reform is implemented and taken seriously, Weisselberg believes it could lead to vital changes in police practices and trial procedures.

“While taping is not a panacea, it is one important tool used by police when the state has to shoulder the burden of proof at trial,” he says. “Taping can ensure that a witness’s recollections are promptly and accurately preserved. And as long as the entire interaction is recorded, it is a powerful deterrent to coercive police practices.”

More information about the film is available here.