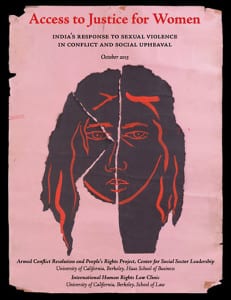 In India, female victims of sexual violence during social unrest, no matter how heinous the crime, have little chance of retribution. Nearly all institutions, politicians, and state officials thwart their efforts, according to a new report. Access to Justice for Women: India’s Response to Sexual Violence in Conflict and Social Upheaval looks at India’s failed responses to these women and calls for corrective action and legal reforms.

The report is a collaboration between Berkeley Law’s International Human Rights Law Clinic (IHRLC) and the Armed Conflict Resolution and People’s Rights Project (ACRes) at the Haas School of Business. Although the report focuses on female victims in India, the authors note that sexual attacks are perpetrated among the country’s other vulnerable groups.

Despite calls for reform after the 2012 Delhi gang rape and murder of a young female student that outraged the global community, sexual violence remains widespread across troubled areas of India. The underlying causes are complex, but stem, in part, from the 1947 partition of India and Pakistan that exacerbated conflicts between Hindu and Muslim communities—and inflamed deeply rooted cultural and political tensions.

Access to Justice examines four emblematic cases of sexual attacks: two occurred in the states of Punjab and Jammu & Kashmir; two others during mob violence in Gujarat and Odisha.

The sexual crimes are “gruesome,” said co-author Roxanna Altholz ’99, IHRLC’s associate director, at a recent panel event to launch the report. “One instinct is to turn away,” she said, but implored the audience to continue to “listen to the voices of these women,” and to recognize their courage and resilience.

Sexual brutality against women can take many forms, including rape, sexual slavery, honor killings, and more, said Laurel Fletcher, director of the law clinic and report co-author. “But what’s common across these crimes,” she said, is “the failure of the state to protect women and to provide survivors access to justice.”

“Justice for these crimes is the exception and not the rule,” Fletcher added.

The four selected cases involve different national and local minority communities, different forms of sexual violence and perpetrators, and different political contexts. Despite these differences, the report reveals a common theme: the Indian justice system failed to investigate, prosecute, and punish the perpetrators—and failed to provide effective redress for victims.

Altholz described one case of a woman abducted by police in Punjab, beaten and raped in jail, and then threatened with retaliation if she reported the crime. The woman asked police to investigate, but they refused to take action. She sought help at a local hospital, but doctors rebuffed her. She wrote letters to a local judge until authorities finally agreed to try the case. It took 14 years for a conviction affirmed on appeal after 80 court hearings in total. And this case is atypical because the perpetrators served time in jail. Most go free, according to the report, with a slap on the wrist.

“For an illiterate village woman to try to get a complaint before a judge is a really Herculean task,” Altholz said.

Impunity is the norm

“Impunity is the result of state action and inaction across institutions and professions: police officers, military personnel, doctors, lawyers, prosecutors, investigators, and judges,” Altholz said. Perpetrators are rarely held accountable, she added, whether due to a code of silence, fear of retaliation, lax laws, or lack of political will.

Clinic alumna Mallika Kaur ’09, a director of programs for the Center for Social Sector Leadership at Haas and report co-author, underscored the need for legal reform in India. “It’s not just to enable people to live without terror, but to enable them to live on their own terms,” she said. “This is not too tall an order for democracy.”

The coauthors examined obstacles to effective investigation, prosecution, and reparation of sexual crimes and recommended a number of reforms. The first one “really appeals to common sense,” Altholz said: redefine rape as a crime of violence in India. “It’s now defined as a crime against modesty, so the emphasis is placed on the woman’s consent, not the use of force and coercion,” she said.

Other recommendations include sanctions against public officials who obstruct investigations, witness-victim protection programs, and independent and impartial tribunals.

The study of sexual violence as a tool of war is a fast-growing area of expertise for IHRLC. Multiple teams of clinic students have worked on related projects over the last few years, which helped build a foundation for this project, Fletcher said.

Other panelists at the event included Angana Chatterji and Shashi Buluswar, co-chairs of ACRes. Along with Kaur, they co-edited and released a related report, Conflicted Democracies and Gendered Violence: The Right to Heal. Both publications will be distributed to local, national, and international institutions and libraries specializing in law, human rights, social sciences, and South Asia studies, Kaur said.