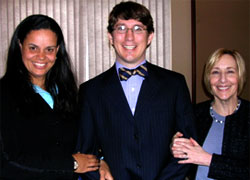 Mark Feeser ’07 was nominated twice for this year’s Brian M. Sax Prize for Excellence in Clinical Advocacy, both for his work as a second-year student at the East Bay Community Law Center (EBCLC) and for his current participation at the Death Penalty Clinic. The $1000 award, given annually to a graduating student from one of Boalt Hall’s clinics, will be presented at the Brian M. Sax Prize Luncheon on April 20.

In the Death Penalty Clinic, Feeser excelled at an astonishing array of assignments and distinguished himself in particular as a member of a team representing a client on Alabama’s death row. Mark immersed himself in the physical evidence in the case, and learned the language of unfamiliar fields such as ballistics, crime scene reconstruction, and forensic pathology. He worked with several experts to bring together a coherent and compelling defense theory.

Feeser—who holds a master’s degree in public administration and was a senior budget examiner at the New York State Division of the Budget—applied his statistical acumen, research skills, and innovative thinking to a challenge to racially discriminatory charging practices. Says Professor Elisabeth Semel, director of the Death Penalty Clinic, “What stands out about Mark is his willingness and ability to take the initiative and push the envelope, always with good judgment and respect for the other members of the team.”

Last year, as an EBCLC student, Feeser helped clients of the Clean Slate Practice expunge their criminal records in order to gain access to stable employment, housing, educational opportunities, and civic participation. Although he had a heavy caseload, he provided each client full representation from intake to post-conviction hearings, demonstrating excellence in client relationships, case preparation, and courtroom advocacy. Tirien Steinbach, newly appointed executive director of EBCLC and Feeser’s supervisor, praised him for his “zealous, thoughtful, and compassionate approach to the work, and his commitment to candid reflection on the legal profession.”

The Sax Prize Luncheon, which will honor all of the 2006-07 clinical students as well as Feeser, will be held from 12:30-2 p.m. in Boalt’s Goldberg Room. For more information, contact Jean Hayes, administrator for the Center on Clinical Education at jhayes@law.berkeley.edu.