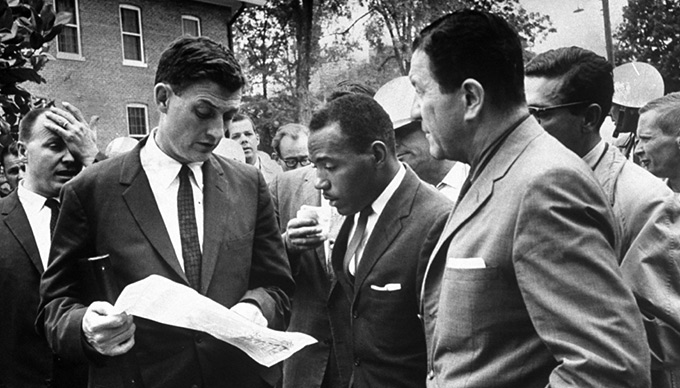 Revered lawyer John Doar ’49, who led the federal government’s effort to protect civil rights in the South, died Tuesday, Nov. 11, in New York City of congestive heart failure. He was 92.

As the top lawyer in the U.S. Justice Department’s Civil Rights Division from 1960 to 1967, Doar routinely risked his own safety while striving to ensure the equal treatment of African Americans. He pushed relentlessly to enforce the constitutional ban on racial discrimination in voter registration—filing lawsuits in every county of Alabama, Louisiana, and Mississippi.

In a statement, President Barack Obama called Doar “one of the bravest American lawyers of his or any era. As the face of the Justice Department in the segregated South, John escorted James Meredith to the University of Mississippi. He walked alongside the Selma-to-Montgomery march. He laid the groundwork for the Civil Rights Act and the Voting Rights Act. Time and time again, John put his life on the line to make real our country’s promise of equal rights for all. Without John’s courage and perseverance, Michelle and I might not be where we are today, and our thoughts and prayers are with his children, his grandchildren, and all those who loved and admired him.”

Obama awarded Doar the Presidential Medal of Freedom, America’s highest honor given to civilians, in 2012. Recognized among a group of recipients that included Madeline Albright, Bob Dylan, and John Glenn, called it “an honor that will stay with me always.”

In 1961, Doar rode across Alabama with the Freedom Riders—who endured threats and violence while riding buses through the South in the early 1960s to protest the non-enforcement of Supreme Court decisions rejecting segregated public busing. He escaped harm, but saw a Justice Department associate get knocked unconscious with a pipe after trying to help a woman rider being chased by an angry mob.

The following year, Doar and a federal marshal escorted James Meredith when he registered as the University of Mississippi’s first African American student amid protestors determined to keep the school segregated. After an overnight riot left 160 marshals wounded and two people dead, Doar lived with Meredith for the next few weeks. In 1963, Doar defused a potential riot in Jackson, Miss., where hundreds of African Americans marched after the funeral for slain civil rights leader Medgar Evers. When police officers with drawn weapons ordered the crowd to disperse, the marchers refused and some began to throw bottles and rocks. As the tension escalated, Doar bolted into the shrinking space between the groups and successfully urged calmer heads to prevail.

“John prevented what would otherwise have been a slaughter,” said U.S. District Court Judge Thelton Henderson ’62, one of eight Berkeley Law graduates who worked under Doar. “He had the courage to stand in the line of fire, where no one else would dare to tread. Only God knows how many lives were saved.”

In 1964, Doar prosecuted the Mississippi Burning killings of three civil rights workers, leading to the conviction of seven Ku Klux Klan members. A year later, after three Klansmen murdered a white volunteer on the last night of a voting rights march from Selma to Montgomery, Ala., Doar led the prosecution that resulted in maximum 10-year prison sentences.

But it was his tireless work behind the scenes—doggedly challenging inequitable voter registration practices across the South—that paved a path to the Voting Rights Act of 1965. Working with fellow Berkeley Law graduate St. John Barrett ’48, Doar tackled new legal fields with few precedents while facing intimidation, violence, and corruption.

“Brave but unassuming, passionate but unbiased, he repeatedly risked his life to preserve the rule of law and stand up for that which was right,” U.S. Attorney General Eric Holder said in a statement. “I have always regarded John Doar as a personal hero and an embodiment of what it means to be a public servant. In so many ways, he defined what is best about the department he served so faithfully during one of its golden eras—proving every day, by word and by deed, that the law can be a strong, deft instrument of lasting, positive change.”

In addition to Henderson, the group of newly-minted Berkeley Law graduates recruited to work with Doar included classmates Kathryn Mickle Werdegar ’62 and Brian Landsberg ’62. Now a California Supreme Court judge, Werdegar said Doar “provided extraordinary leadership in the Civil Rights Division of the Justice Department at a most critical time in its history.”

Landsberg, a University of the Pacific law professor, said Doar’s approach to dismantling the South’s racial caste system demanded meticulous case development. “John taught us to immerse ourselves in both the paper records and human stories,” Landsberg recalled. “He expected much from his staff, and he led by example. Weekends were for interviewing potential witnesses; nights were for writing up one’s notes.”

Born on Dec. 3, 1921, in Minneapolis, Doar grew up in New Richmond, Wis. After graduating from Princeton University and Berkeley Law, he served in the Army Air Corps during World War II. Doar spent a decade working at his family’s New Richmond law firm before joining the Justice Department in 1960.

After leaving in 1967, Doar worked for the Bedford Stuyvesant Development and Services Corp. in New York. In 1973, he was tapped to lead the impeachment investigation of President Richard Nixon in the wake of the Watergate scandal. A Republican, Doar was named chief counsel to the House Judiciary Committee and constructed a powerful case. With all signs pointing to impeachment, Nixon resigned.

During a 2012 interview, Doar said “I am no longer actively practicing law, but I am working on several matters. I have always worked. It is hard to change.”

Doar is survived by his sons Robert, Michael, and Burke; his daughter Mary Gael; 12 grandchildren; and one great-grandchild. Visitation services will be held at the Frank E. Campbell Funeral Chapel (1076 Madison Ave. in New York City) Thursday, Nov. 13 from 7 to 9 pm, and Friday, Nov. 14 from 2 to 5 pm.

“I had the great honor of having lunch with John in New York recently, and it was an experience I’ll never forget,” said Berkeley Law Dean Sujit Choudhry. “His courage and skill as a fierce advocate for equality were remarkable, and his service to the nation was nothing short of extraordinary. He truly made America a better place.”