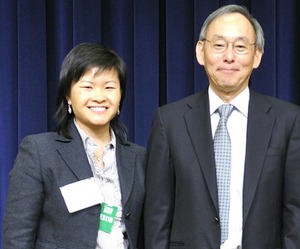 It was a metaphor that helped Grace Hsu ’14 win a Most Innovative Proposal award at the U.S. Department of Energy’s recent Better Buildings Case Competition. The contest challenged university students to create ways to improve energy efficiency in structures across the nation.

“I described a brick wall that Houston had to strategically knock down to spur energy-upgrade investments for its commercial buildings,” Hsu said. “The bricks represented barriers. I urged the city to target some bricks, but argued that others were better left to federal or state government, utilities, or financial institutions.”

The teams were judged on their written proposals and oral presentations. Each team had to present a cogent financial plan, business strategy, and program design; develop realistic, scalable, and implementable solutions; and analyze the potential outcomes and likelihood of success.

During the competition, students had access to experts from commercial real estate and government agencies. Hsu also received guidance from Steven Weissman, energy program director at the Center for Law, Energy & the Environment. She drafted her proposal with Haas School of Business student Anson Kwan. Both are active in the Berkeley Energy & Resources Collaborative, UC Berkeley’s network of students, alumni, faculty, and industry professionals who research alternative energy solutions.

Although economists tout energy efficiency measures as a good investment, Hsu said the market has yet to respond. She noted that while building owners often have the authority to implement energy upgrades, there is little incentive to do so when tenants pay the utility bills. As for building owners willing to take action, according to Hsu, many don’t have time to research the most cost-effective technologies.

Although more than two years of law school remain before Hsu receives her degree, she is “definitely pursuing energy-related work” upon graduation. She will spend this summer in Commissioner Mark Ferron’s office at the California Public Utilities Commission, working on analyses that inform policies for renewable energy deployment.