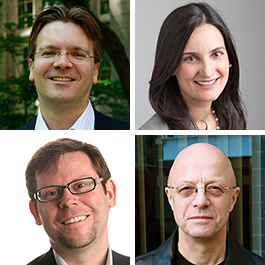 Ayotte’s teaching and scholarship focus on bankruptcy, corporate finance, law and economics. He’s spent the past 12 years at Northwestern University School of Law and Columbia Business School, where he won the Dean’s Award for Teaching Excellence.

Crump is the new associate director of the Samuelson Law, Technology & Public Policy Clinic. She most recently worked as an attorney at the American Civil Liberties Union’s Speech, Privacy and Technology Project and a non-resident fellow at the Stanford Center for Internet and Society.

Tomlins served as the Chancellor’s Professor of Law at UC Irvine. A prominent legal historian, he was instrumental in building the school’s law and society program, as well as forging cross-disciplinary ties with other campus departments.

The following profiles of each new faculty member are not intended to encompass all career achievements, but rather to highlight noteworthy positions and accomplishments: